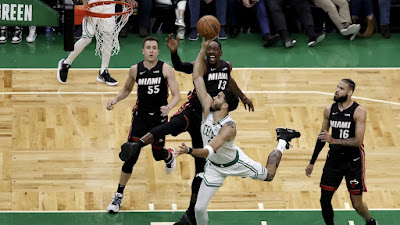 It wasn't pretty but the Celtics won a pivotal Game 4, beating the Miami Heat in a 102-82 blowout Monday night at TD Garden to even this best-of-7 series 2-2.
Jayson Tatum finished with 31 points on 8-of-16 shooting from the field, but only 1-of-7 from deep, as Boston jumped out to an 26-4 run to start the first quarter and never looked, leading by as much as 32 points to avoid a 3-1 hole in the Eastern Conference finals.

"Obviously, we knew how important this game was," Tatum said in his postgame presser. "Everybody just had to come up with a different sense of urgency."

Payton Pritchard had 14 points on 3-of-6 from behind the arc, while Derrick White, who started for Marcus Smart (ankle sprain) -- added 13 points, eight rebounds and six assists. Robert Williams made his return after sitting out Game 3 with left knee soreness to net 12 points and grab nine rebounds for the Celtics, who are now 5-0 in the playoffs following a lost.

"[We] just got to muster that same energy when we came off a win as well as a loss," said C's coach Ime Udoka. "This is a three-game series now. Can't always just flip the mindset when we come off a loss and get a little desperate."

Victor Oladipo led the Heat with 23 points and Duncan Robinson had 14 points off the bench. The starting lineup of Jimmy Butler, P.J. Tucker, Bam Adebayo, Kyle Lowry and Max Strus combined for 7-of-36 on shot attempts from the floor and a total of 18 points, as they all sat out the fourth quarter.
According to ESPN Stats & Info, the 18 points scored by Miami's starters is the lowest total by a starting five in a playoff game since starters were first tracked beginning in 1970-71 season.
Miami was also without Tyler Herro in Game 4 due to a groin injury suffered in Saturday's Game 3 win.
The Celtics outrebounded the Heat 20-8 and held them to 3-of-20 from the floor in the first period, as Miami didn't get their first points until Adebayo's free throw at the 7:56 mark and their first field goal at 3:22 -- a 3-pointer by Oladipo.
Boston took a 29-11 advantage into the second quarter, which ballooned to 57-33 lead at the break.
Tatum is now averaging 32.6 points per-game following a lost in the postseason, the most in franchise playoff history so far.
The Celtics look to take a 3-2 lead when they head to Miami Wednesday night, ESPN has the tip-off at 8:30 ET.