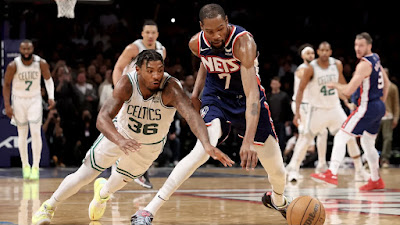 The Celtics led wire-to-wire to beat the Brooklyn Nets 116-112 in Game 4 Monday night at Barclays Center to complete the series sweep and move on to the Eastern Conference semi-finals.
Jayson Tatum finished with 29 points on 9-of-16 shooting, including 4-of-6 from 3 and five rebounds before fouling out with 2:48 left to play, despite disagreeing with the call.

"Couldn't believe it at all, but I think that's what we're built for," Tatum said in postgame presser.

Jaylen Brown had 22 points, eight rebounds, while Marcus Smart added 20 points and 11 rebounds. Grant Williams chipped in 14 points on 4-of-6 from deep and Al Horford scored 13 for the Celtics, who become the first team to reach the second round of the playoffs.
Boston won the last game of the regular season to clinch the No. 2 seed despite other teams electing to rest their players and avoid a matchup with the Nets. Once a below .500 roster midway through the year, only to finish 31-10.

"It's funny to us, because we don't duck and dodge anybody," Smart said in his postgame comments. "We knew what we were going to come in here and do."

Kevin Durant had his best offense game of the series, leading all scorers with 39 points on 13-of-31 from the field and 3-of-11 from behind the arc to go along with nine assists and seven rebounds in 47 minutes of action. The Nets All-Star entered Game 4 hitting just 19-of-52 attempts and having committed 17 turnovers.

"A lot of stuff that may factor into why we lose, but they were just a better team," Durant said to reporters about the Celtics.

Durant losing in the first round is only the second time he's been eliminated in the opening round of the postseason since 2010 with Oklahoma City -- his very first playoff series -- as he won his previous nine straight first round matchups.
Kyrie Irving had 20 points on 6-of-13 shooting and Seth Curry was 5-of-9 from 3-point territory to net 23 points in Brooklyn's final game of the season.

"[There's] disappointment, a little sadness, because we didn't play as well as a team as we wanted to," said Irving during his postgame press conference.

Boston was ahead 45-44 with 3:29 left to play in the first half, before Grant Williams hit three-straight 3s as part of a 13-6 spurt to end the second period and take a 58-50 advantage into the break.
Tatum's 12 points in the third helped give the Celtics their biggest lead of the game (90-75) in the final seconds of the quarter. But he went to the bench with his fifth foul with 8:17 left to play while the Nets were in the middle of a 10-5 run.
Brooklyn took advantage of Tatum being out and scored 11 of the next 15 points to cut their deficit to three (102-99) with 5:24 remaining. Tatum re-entered the game a few seconds later but it became the Brown and Smart show the rest of the way, as Tatum picked up his sixth foul on a charge less than three minutes later.
An Irving 3 and a Durant floater on back-to-back plays had the Nets down by one (109-108) the closest they would get with 1:28 left. Brown's 3 made it a two possession game before Durant went 1-of-2 from the free throw, which led to a Horford put-back layup to once again give the Celtics a four-point lead with 13.7 left to play.
Smart (7) and Brown (6) scored 13 of the C's final 15 points to seal the win and series to move on.

"It was another hard fought game, probably the closest sweep you'll ever see," said Ime Udoka after the win. Credit to Brooklyn, they came out with everything tonight."

Boston has swept their first-round series three out of the last four years, beating the Indiana Pacers in 2019 and the Philadelphia 76ers in the Orlando bubble two seasons ago.
Meanwhile, the Nets were heavy favorites to come out of the East at the start of the 2021-22 campaign and started off strong even without Irving. But after Durant went down with a knee injury and James Harden demanding a trade just prior to the deadline -- which brought back Ben Simmons from the Philadelphia 76ers -- they had to finish strong just to make the play-in tournament and grab the No. 7 seed.
Simmons, who was reported to make his Nets debut in Game 4, but was ruled out with back soreness and never suited up for Brooklyn since being acquired for Harden or even played an NBA game all season long.
The Celtics await the winner of the Milwaukee Bucks and Chicago Bulls series, as the reigning champions have a comfortable 3-1 lead with a chance to close it out Wednesday night.
Game Notes: