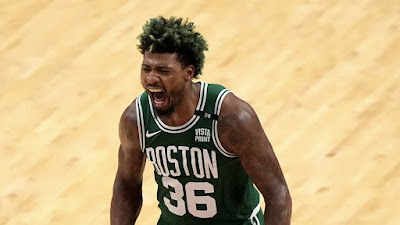 Celtics guard Marcus Smart has won the NBA Hustle Award once again, becoming the first-ever two-time recipient, as he also took home the honor during the 2018-19 campaign.
According to the NBA, the Hustle Award was created to reward "players that do the little things that don't often show up in the traditional box score." It is mostly based on the Hustle stats that the league began tracking in the 2016 playoffs, which include contested shots, deflections, screen assists, charges drawn, and loose balls recovered, among other categories.
During the regular season, Smart was ranked 11th in deflections (205), 10th in charges drawn (16), and fifth in loose balls recovered (74). He also ranked sixth amongst guards in screen assists (39).

Boston Celtics guard Marcus Smart has been named the winner of the 2021-22 NBA Hustle Award, the NBA announced today.

Smart becomes the first two-time winner of the Hustle Award after first earning the honor following the 2018-19 season. pic.twitter.com/ACMPchcWyP


Past winners of the Hustle Award include Thaddeus Young (2020-21), Montrezl Harrell (2019-20), Amir Johnson (2017-18), and Patrick Beverley (2016-17).
Smart has enjoyed a career-season, while winning Defensive Player of the Year -- the first guard to win the award since Gary Payton in 1996, second overall in NBA history -- and was also named All-Defensive First Team last week. The veteran, who sat out of the Celtics' Game 4 win over the Miami Heat with a sprained ankle after rolling it in the third quarter of Game 3, returned to the floor just minutes after retreating to the  locker room to finish the the game despite the 109-103 loss Saturday night.
Game 5 of the Eastern Conference finals is scheduled for Wednesday night at 8:30 ET on ESPN, with this best-of-7 series tied 2-2.