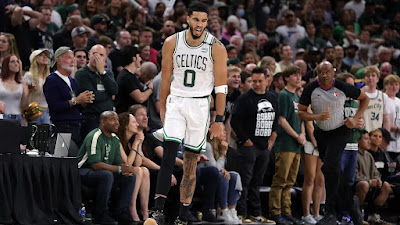 The Celtics have earned the right to play a Game 7 in their home gym against the Milwaukee Bucks, after knotting up this series 3-3 Friday night.
Jayson Tatum played like a superstar, putting up an historic 46-point performance in the Celtics' 108-95 win to set up a decisive seventh game back in Boston. While facing elimination, the All-Star forward went toe-to-toe with the former two-time league MVP in Giannis Antetkounmpo and come out on top with the whole basketball world watching.

"I was excited to play today, Game 6," Tatum said to the media Friday "This was a big moment, for all of us. For myself, and the team just how we would respond. Losing Game 5 was going to make us or break us. I think we showed a lot of toughness and growth coming out here and getting a win on the road and just giving ourselves a chance."

Aside from going 7-of-15 from deep, Tatum found a variety of ways to score, with 10 of his made field goals being twos, mixed in with drives to the hoop and getting to the line seven times. When the Bucks' defensive collapsed on him, Tatum found open teammates -- dishing out four assists and also hauled down nine rebounds.
Despite Antetokounmpo finishing with 44 points, Tatum responded and the Celtics held on firm to a double-digit lead for most of the night.

"He went into another mode right there," Smart said of Tatum in his postgame presser. "We saw it in his eyes. He was aggressive, he was coming to us: 'Give me the ball.' And we'd give him the ball. He asked for it, and that's what we're going to do. Like I said, that's why he gets paid the big bucks."

Jaylen Brown, who had 22 points on 7-of-16 shooting, including 4-of-7 from behind the arc, spoke about Tatum's play in Milwaukee that helped the Celtics force a Game 7.

"That was a big-time performance," Brown added in his postgame comments. "Definitely a signature game for the Celtics and for Jayson. That was big...We don't feel like we should be the team going home."

Still, anything can happen in a Game 7 (the two best words in all of sports), but you got to like this Celtics team's chances giving all that has transpired in this turnaround within the 2021-22 campaign.

"I've had a few Game 7s in Boston, and I just understand and know that being in the Garden is not a place you want to be on the road in Game 7," Smart said.

Either way with this version of Tatum leading the pack and a raucous TD Garden crowd playing up against the defending NBA champs, it's going to be must see TV.

The Celtics and Bucks square off in a do or die Game 7 today, as ABC has the tip-off at 3:30 PM ET.
Joel Pavón
Follow @Joe1_CSP