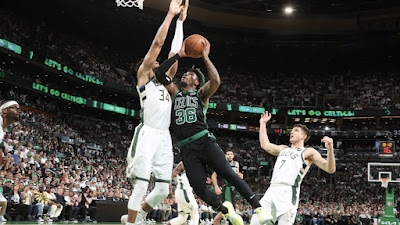 Marcus Smart scurried off the floor dangling his right arm with 1:23 left in the second quarter of Game 1. At halftime the Celtics said it was "shoulder stinger" and a right quad contusion, as the veteran guard returned to start the third period.
Smart, who finished with 10 points and six assists in 33 minutes, could also be seen limping into the locker room just prior to final buzzer of the 101-89 loss to the Milwaukee Bucks.

"He did take a beating today," said Al Horford of Smart in his postgame presser. "I don't know how he does it, but he finds a way. He gets back in there. And I told him tonight, I was like, ‘get your rest, get ready, and we got another one on Tuesday."

Ime Udoka also didn't think it was nothing to worry about or prevent Smart from missing any games.

"He took a few hits," said the C's coach during his postgame comments. "I think the quad bothered him more than the shoulder. But he's going to play through a lot."

However, on Monday it has officially become a concern as the Celtics listed Smart as questionable ahead of Game 2 with a right thigh contusion.

"(He's) sore. He had a pretty bad quad contusion. He got hit twice I think during the game. He's a tough guy who's going to try and play through things. We'll get him some treatment today and we'll see how he feels tomorrow," Udoka said after practice.
"It's more than just pain tolerance. It's something that's going to be stiff. He got hit twice and he's had this in the past where he's had to miss some games this year. There's some tightness and restriction of movement as well," Udoka added.

It's likely the call to have Smart play or not would be made closer to the 7:00 ET tip-off of Game 2 Tuesday night, which TNT will broadcast.