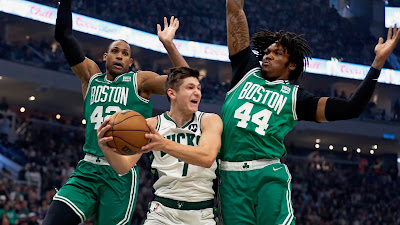 The Celtics will be without Robert Williams for a second-straight game Wednesday night, as he's out with left knee soreness.
According to C's coach Ime Udoka, Williams, who was listed as questionable yesterday, was still experiencing soreness throughout Wednesday and the team decided to hold him out of Game 5 of this best-of-7 series against the Milwaukee Bucks -- which is tied 2-2.

"The swelling went down and that's why we were hopeful for tonight, due to the swelling getting better over the last few days," Udoka said during his pregame presser. "But he had some soreness, so we'll be overly cautious coming off the surgery. Until it's pain-free, we'll rest him until he's ready."

Williams returned from a partially torn meniscus in his left knee in Game 3 of Boston's first-round playoff series victory over the Brooklyn Nets, before returning to the starting lineup for the first three games of the second-round.
Despite Williams being out for Monday's pivotal Game 4, the Celtics beat the Bucks 116-108 to avoid a 3-1 hole.
Per Udoka, Grant Williams will make his second start tonight, as TNT has the tip-off at 7:00 ET from TD Garden.
Joel Pavón
Follow @Joe1_CSP