Marcus Smart out for Game 2 with quad contusion, Derrick White to make start 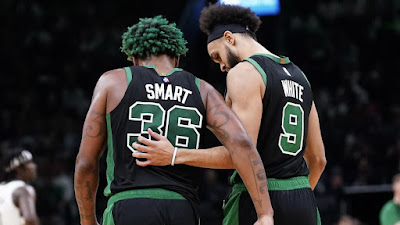 The Celtics will have to even this series without their starting point guard and best defender in Marcus Smart.
The Defensive Player of the Year has been ruled out with a right quad contusion for Game 2, according to the team.

Smart was listed as questionable on Monday after sustaining the injury in Boston's 101-89 Game 1 loss. Coach Ime Udoka spoke to the media after practice, calling the quad contusion "pretty bad," despite it appearing like Smart had injured his right shoulder.
While the injury to the shoulder was deemed nothing more than a "stinger," Smart's quad contusion could be a long-term issue if it remains sore within the next few days before Game 3 in Milwaukee on Saturday afternoon.

"[There's] swelling, pain, restricted movement," said Udoka during today's pregame presser. "Some limited movement didn't get better over the days like we thought it would. I don't think it's long term with the three days off, we're assuming he'll be ok."

With Smart, who's leads the team in assist with 5.9 per game this season and their current best defender, his services will be missed on both ends of the floor as the Celtics look to avoid a 2-0 hole in this best-of-7 Eastern Conference Semifinals.
Derrick White will start in Smart's place in Game 2 tonight, which tips-off at 7:00 ET on TNT.
Joel Pavón
Follow @Joe1_CSP