Celtics will be without Robert Williams (knee soreness) in pivotal Game 4 vs. Bucks 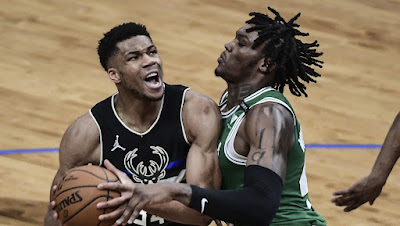 The Celtics have been dealt a huge blow, as the team announced that Robert Williams is a late scratch with left knee soreness just 90 minutes prior to Game 4 tip-off.
Williams, who previously missed nearly four weeks with a partially torn meniscus in the same knee, was not listed on the injury report for Sunday or Monday.


According to coach Ime Udoka, Williams' knee flared up today, despite not experiencing any pain or soreness after the Celtics' 103-101 Game 3 loss on Saturday.

"It's not unexpected to have this happen after a surgery," Udoka said of Williams' injury during his pregame presser. "It's soreness at times and just a little more irritated today."

Grant Williams is expected to start tonight in Robert's place, as the Celtics look to avoid going down 3-1 series hole. This also opens up minutes for Daniel Theis, who had a huge role in the team's first-round sweep of the Brooklyn Nets.
With Robert Williams out, Al Horford, Grant Williams and Theis will have the tall task of containing Giannis Antetokounmpo -- who's coming off a 42-point performance in Game 3.
While it doesn't appear to be a long-term absence, Udoka noted that Robert Williams should return to the lineup come Game 5 in Boston on Wednesday.
Game 4 is scheduled for 7:30 ET start on TNT.
Joel Pavón
Follow @Joe1_CSP