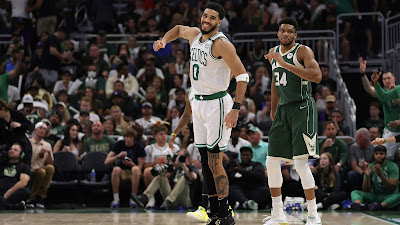 The Celtics avoid elimination and live to see another day after beating the Milwaukee Bucks 108-95 Friday night in Game 6 at Fiserv Forum to even the series 3-3.
Jayson Tatum had a game-high 46 points on 17-of-32 from the field, including 7-of-15 from deep to go along with nine rebounds and four assists to help force a decisive seventh game.

"I wasn't going to leave anything out there and have any regrets," Tatum said in his postgame presser. "Just trying to do what it took."

Tatum tied a franchise record with Paul Pierce (46 points on May 3, 2002) for the second most points scored while facing playoff elimination.
Meanwhile, Boston bounced back from a crushing 110-107 home loss in Game 5, where they blew a 14-point fourth quarter lead, the Bucks tried to rally late for a second-straight game but the C's held on to set up a winner take all tomorrow afternoon.

"Tonight will be the first night since that game that I'll get some sleep," said Marcus Smart in his postgame comments, after finishing with 21 points, seven assists and no turnovers.

Jaylen Brown had 22 points on 7-of-16 from the floor and 4-of-7 from 3, as the Celtics hit 17-of-43 overall from beyond the 3-point arc, while limiting Milwaukee to just 7-of-29 on 3s. Robert Williams missed his third straight game due to a bone bruise in his left knee he sustained in Game 3.
Giannis Antetokounmpo finished with 44 points on 14-of-30 shooting to go along with 20 rebounds and six assists for the Bucks, who hadn't lost an elimination game since Game 7 against the Celtics in a 2018 first-round series.
Jrue Holiday added 17 points on 17 shot attempts and Pat Connaughton chipped in 14 points off the bench.
Milwaukee was held to 17 second quarter points and trailed 53-43 at the half before the Celtics went on a 15-7 spurt to open the third with an 18-point lead (68-50) -- the largest of the night. However, the Bucks cut the deficit to nine with 2:54 left in the period.
Boston had a 84-70 advantage at the start of the final frame when the officials ruled Grant Williams had drawn a charge on Antetokounmpo, which would have been his fifth foul. But the Bucks challenged the call and were successful, sending the All-Star to the free throw line.
Antetokounmpo hit both free throws to kick-off an 8-0 run that got Milwaukee back into the game. The Bucks got within four (85-81) on an Antetokounmpo 3-pointer with 8:42 left -- the closest they would get the rest of the way.
Tatum wanted to make sure that the Celtics wouldn't surrender their lead by winning the 50-50 balls as the Bucks began to rally, which began to mirror the fourth quarter collapse in Game 5.

The next 11 points for the Celtics would come from Tatum before the team used an 8-0 run to put them up 100-87 with 4:20 left to play. Boston maintained its double-digit margin to finish the game.

"We had the right resolve," C's coach Ime Udoka said. "We talked about it after that game. We let an opportunity slip away [Wednesday] but we still had a chance to make it a better story, I guess."

The Celtics host the Bucks in Game 7 Sunday afternoon and ABC will have the tip-off from TD Garden at 3:30 ET.

Boston hit 43.7% from the field, including 39.5% from 3-point territory and the Bucks were 40.9% from the floor, 24.1% from 3. The Celtics had 22 assists on 38 made baskets to Milwaukee's 15 dimes on 36 made shots. The C's were outrebounded 49-42 and outscored in the paint 48-34, while only turning the ball over eight times to the Bucks' 11.
When it comes to Game 7s, the Celtics own a 24-9 record and the Bucks are 3-8, with their most recent coming in last season's second-round matchup with the Brooklyn Nets in an overtime victory.
Joel Pavón
Follow @Joe1_CSP