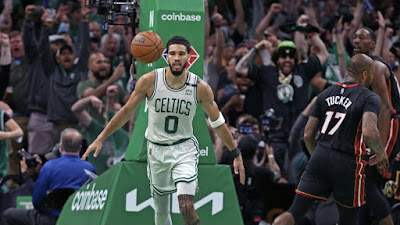 Celtics forward Jayson Tatum has been named to the All-NBA First Team, making it a second time in his career earning an All-NBA nod after making the All-NBA Third Team during the 2019-20 campaign.
Tatum averaged 26.9 points, 8.0 rebounds, and 4.4 assists, all career-highs, while shooting 45.3% from the field and 35.3% from deep and 85.3% from the free throw line in 76 games played.

The Kia All-NBA First Team is made up entirely of players age 27 or younger for the first time since the 1954-55 season.


Luka Doncic of the Dallas Mavericks, Devin Booker of the Phoenix Suns, Giannis Antetokounmpo of the Milwaukee Bucks, and Nikola Jokic of the Denver Nuggets join Tatum with first-team honors -- as all are under the age of 27 for the first time since the 1954-55 season.
Despite Tatum receiving fewer voting points than Joel Embiid, who finished second in the MVP race behind Jokic and ahead of Antetkounmpo -- received 57 first-team votes and 414 total votes, while Tatum received 49 first-team votes and 390 total points. Essentially, Embiid most likely received split votes between him as a center and as a forward, dropping him to the second-team, with all of Tatum's votes were for him as a forward.
Embiid is joined by Ja Morant, Kevin Durant, Stephen Curry and DeMar DeRozan, who all were selected as the second-team. The third-team rounds out with Karl Anthony Towns, LeBron James, Chris Paul, Trae Young and Pascal Siakam.
Jaylen Brown also received three votes for All-NBA Third Team as the only other Celtics players to be considered.
Tatum a year ago missed out on an significant bonus after not making any of the All-NBA Teams due to voters splitting his votes between being a forward and a guard, allowing Kyrie Irving to earn an All-NBA Third Team slot over him.
If Tatum had made any of the three teams last year, he would have made an additional $30 million on his max contract over the length of his rookie-scale extension -- a clause known as the "Rose rule" in which players with Tatum's years in the league can earn up to 30% of the salary cap on a max deal instead of the standard 25%.
Tatum becomes the first Celtic since Kevin Garnett during the 2007-08 season to earn an All-NBA First Team selection. Others in franchise history to accomplish the feat include; Larry Bird, Kevin McHale, John Havlicek, Bill Russell, Bob Cousy, Bill Sharman, Ed Macauley, and Ed Sadowski.