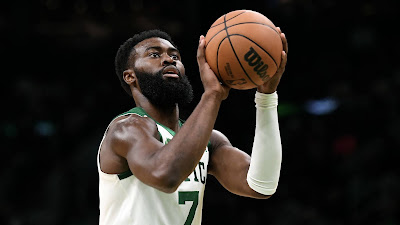 Jayson Tatum will be sidelined for at least 1-2 weeks with a right hamstring strain, according to Celtics coach Ime Udoka.
The All-Star wing sustained the injury late in the third quarter of the Celtics' 95-78 win over the Miami Heat Thursday night.


Brown missed the Celtics' 107-104 loss to the Dallas Mavericks due to what the team called hamstring tightness. At 4-6, it's not ideal for Boston to not have their best scorer in the lineup for the next few games, as Udoka gave an update on Brown's injury following Monday's practice.

Udoka on Jaylen's hamstring:
“He knows his body pretty well, and he said it didn’t feel terrible but he did feel it ... The strain showed a week or two, and he knew something. He was being overly-cautious himself because of his past history.”


With Brown out, Udoka will most likely lean on Dennis Schröder -- who has started alongside Marcus Smart -- Josh Richardson, Aaron Nesmith, Romeo Langford and Payton Pritchard to make up for the lack of scoring.

"Jaylen was playing so well, starting to get his legs under him and trying to get a feel for everything," said Al Horford in his Monday post-practice presser. "We just have to rally around it. This is going to give  opportunities for some of our other guys to step in and contribute a little more. These kind of things happen."

The Celtics are off until Wednesday when they host Toronto at TD Garden, where they are still winless this season in three games played and suffered a blowout loss at the hands of the Raptors in their home opener last month.
On Friday, it will be the first appearance in Boston for the Milwaukee Bucks since being crowned NBA champs, before the C's head to Cleveland on a second night of a back-to-back and once again take on the Cavaliers next Monday.
If Brown isn't back by then, the second week features a matchup in Atlanta, then back-to-back home games against the rival Los Angeles Lakers (without LeBron James) and the Oklahoma City Thunder, before the Celtics face the Houston Rockets at the Garden the following Monday.
Brown is averaging a career-high 25.6 points, 6.1 rebounds and 2.5 assists, while shooting a career-best 49.3% from the field and 39.7% from deep.
Joel Pavón
Follow @Joe1_CSP