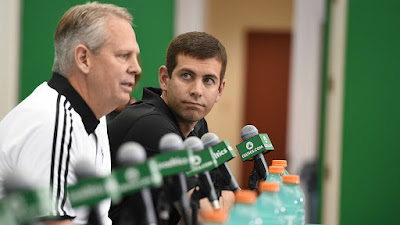 Less than one day after being eliminated from the playoffs by the Brooklyn Nets in five games, the Celtics broke the internet once again — this time with some shocking news.
Serving as the team's president of basketball operations since 2003, Danny Ainge;s tenure in the team's front office has come to an abrupt end after The Athletic's Shams Charania reported he has decided to step down.
Even more surprising, Brad Stevens was promoted to President of Basketball Operations leaving the Celtics in the market for a new head coach. Yahoo Sports' Chris Haynes shared that Lakers assistant Jason Kidd and former Hawks head coach Lloyd Pierce will be in the mix for the Celtics head coach position.
It all started earlier this morning, when Wojnarowski first reported that Ainge was "seriously considering" his future with Boston and would make a decision on whether to step down.

Boston Celtics President of Basketball Operations Danny Ainge is seriously considering his future with the franchise and could make a decision to step down, sources tell ESPN.

Shortly after, Wojnarowski announced that Ainge would be stepping down and Stevens would be taking on a key role in the Celtics' front office. Later reports revealed Stevens would officially replace Ainge as the team’s new GM -- something Celtics players were told about last night, according to Haynes.
Per Wojnarowski, Ainge's departure was discussed for months leading up to the decision and there was talk about potential succession plans with ownership prior to the decision on Wednesday. After being "worn down" coaching the Celtics since the bubble, Stevens was fully on board for the transition, and will play a prominent role in the decision for the team's next head coach.

Ainge has been contemplating leaving the job for several months and had been talking about possible succession plans with ownership, sources tell ESPN. Stevens turns out to be the franchise's choice. Ainge also moved from head coaching in the NBA to the front office with Phoenix.

The Celtics, coming off a disastrous season were expected to shake up the roster, but the news of the swap was unexpected to say the least. Leaving the Celtics with two franchise players and a lot of unknowns, Stevens will have his work cut out for him in his new role with the team.
Considering their lack of depth and talent last season, it remains to be seen how Stevens reconstructs the roster during the offseason. Will both of the Celtics' franchise cornerstones still be around next season? What does Marcus Smart's and Evan Fournier's future look like with the team?
Those questions will need to be addressed in the near future as the Celtics are in need of an infusion of talent to propel them back into contention.
Ian Carrano
Follow @IC_Sports1