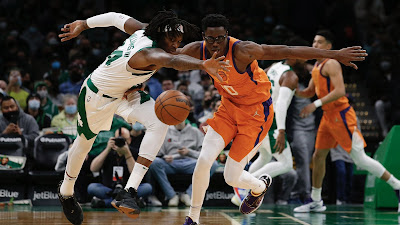 The Celtics went into the New Year with a huge 123-108 win over the Phoenix Suns Friday afternoon, but it was Robert Williams that made headlines.
The 24-year-old big man finished with 10 points, 11 rebounds and 10 assists (career-high) for his first career triple-double. Williams also had five blocks and went a perfect 5-for-5 from the field to become the first player in NBA history to record that impressive stat line while shooting 100% for the game.
Williams was very thankful of his teammates for not only helping him notch the triple-double, but also for getting the much needed victory

"Thanks to my teammates. If they didn't hit shots then I wouldn't have it [triple-double], said Williams on Friday. "Overall, man, I feel like we played a good game. I'm more happy about that. I feel like when we started hitting a little adversity, third quarter, early fourth, we stayed together."

It was only few days ago when Celtics coach Ime Udoka called out Williams for his lackluster performance, especially on defense, in an embarrassing loss to the Minnesota Timberwolves. Clearly the young center took the criticism to heart and responded with a monster game on the defensive end against one of the league's best offensive team in the Suns.

"He's more than people think he is. I talked to him about expanding his game with the role, the minutes, everything increasing. And what we see is a high, high ceiling for him for a lot of different reasons," said Udoka in his postgame presser. "He's been a guy that's been resilient and bounced back every time I've challenged him and I love that about him."

Williams was very appreciative of his coach's words and the fact that he pushes him to grow to be better everyday. He also called it an honor to have Udoka speak that way about him.

"He believes in me a lot. I guess he sees something in me I don't," said Williams. "I'm thankful for the way he pushes me every day, trying to get that out of me. It's an honor to have him talking like that. But obviously, it's more I have to achieve if my coach feels like that."

Celtics All-Star Jaylen Brown, who recorded a double-double of 24 points and 11 rebounds in the win, echoed the praise to his teammate and says Williams has the potential to exceed other's expectations of him.

"Rob is great, man. Rob is exceptional. I think he’s a really talented player," said Brown in his postgame comments. "I think at times he puts a lot of pressure on himself, similar to me, in a sense. But when he comes out and plays basketball there's not a lot of people who can contain him… I tell him all the time: don't be afraid to be great."

Williams is the first Celtics player to record a triple-double this season and after snapping a three-game skid with an impressive win over the league leading Suns, it may be a sign of better things to come in 2022.
Joel Pavón
Follow @Joe1_CSP