Despite shooting woes, Jayson Tatum comes up big in Celtics win over Raptors 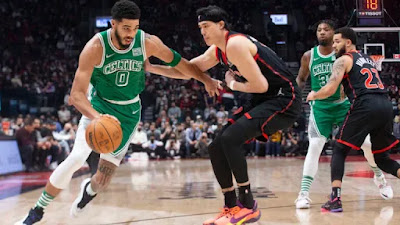 Just when it seemed like Jayson Tatum had finally snapped out of his early season shooting slump, the Celtics All-Star has gone cold again in his last three games.
The latest lackluster 2-of-16 performance from the field against the Toronto Raptors, which also included going 1-of-5 from deep -- for a season low eight points on the night -- has Tatum averaging just 25.5% makes on shot attempts over the last three outings.
It was a week ago when the Celtics forward handed the Houston Rockets its 15th straight loss in what would be his fourth consecutive 30-plus point game, while hitting well over 50% during that stretch.
Despite Tatum struggling to find his shot Sunday night, it was his season-high 10 assists that helped Boston secure a 109-97 win over the Raptors on the road to snap a two-game skid. It was only the fifth time in his NBA career that he hit double-digit dimes and it was two shy of a career-best of 12 -- which he reached in January of 2021.
Teammate and the Celtics' leader in assists, Marcus Smart (5.7), gave Tatum his praises, especially since the veteran guard let be known earlier this month how he felt about the ball being stagnant when it reaches the team's two All-Stars.

"It's been tough for him," Smart said of Tatum's slump, via his postgame presser Sunday night. "He's been doing a good job of really finding guys and we have to reward him for that. That's only going to open up things for him and Jaylen later in games when we and other players, myself included, can knock down those shots."

Still, Tatum, who is averaging just 15.6 points in the last three games, became a playmaker and it opened the door to have teammates like Smart, Josh Richardson, Al Horford and Grant Williams find their offensive rhythm and hit open shots.
While it may not always be ideal for Tatum to go ice cold shooting wise, coach Ime Udoka appreciates that his young star found other ways to make an impact and involve his teammates, even when Jaylen Brown (16 points on 11 attempts) is also struggling to find his shot.

"It was obviously not his best shooting night, but he was playing the right way the whole night," Udoka said of Tatum in his postgame comments. "We know he's going to draw a ton of attention from them and he just continues to trust his guys and make the right play and that leads to assists. 24 assists on 34 baskets is a credit to him. Almost had half of ours and he's just gotta, at times, be the guy that's gonna bait guys out there. Be the decoy to some extent and draw that crowd and you see everybody else pretty much ate off of him tonight. So credit to him for playing the right way, not getting frustrated and then sticking with it."

At 11-10, Tatum and the Celtics will look to clean up some more bad habits when they host the Philadelphia 76ers (11-10) Wednesday night at TD Garden.
Joel Pavón
Follow @Joe1_CSP