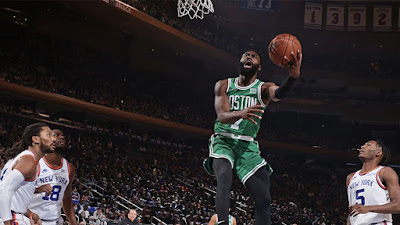 It was an instant classic, despite the Celtics opening the 2021-22 regular season with 138-134 double overtime loss to the New York Knicks at Madison Square Garden Wednesday night.
Jaylen Brown, who was cleared just hours prior to tip-off from the league's Health and Safety Protocol after testing positive from COVID-19 over ten days ago, didn't show any signs of rust as he set a new career-high by scoring 46 points.

"How did I do it? I think just being aggressive, I don't know," Brown said after the game. "I spent a lot of time in quarantine thinking about when I was going to get back out there. Just imagining; seeing the game, visualizing. And some shots fell tonight. I only had, really, 24 hours to prepare. My breathing felt irregular but fine, for the most part. Towards the end, I could feel my heart beating through my chest. But it would have been better if we got the win."

Considering the Celtics All-Star was scheduled to play on a minutes restriction, Brown went 16-of-30 from the field and 8-of-14 from 3-point territory -- including a bomb from the Knicks logo in the closing seconds of regulation -- to go along with nine rebounds, six assists, three steals and a block.

"Adrenaline kind of took over. Once we got to the end of the first overtime going into the second, I could hear my heartbeat," Brown explained. "I tried to do my best to breathe and stuff like that but for the most part, I felt fine, to be honest. Coming out of quarantine playing 46 minutes, I think I did OK."

Jayson Tatum struggled, shooting 7-of-30 from the floor (2-of-15 from 3) to finish with 20 points and 11 rebounds. Robert Williams III also recorded a double-double of 16 points on a perfect 5-of-5 from the field and 6-of-8 at the free throw line, while grabbing 10 rebounds, blocking five shots and stole the ball three times.

"It's just a thrill obviously, being in the Garden makes it special," Williams said in his postgame presser about playing at MSG. "It's just a thrill and a fight. You know both teams are tired and you just want to go at each other."

The Celtics were also without Al Horford (Health and Safety Protocol) and Josh Richardson (migraine) in the opener, as Grant Williams filled in for 'Big Al' as a starter, hitting three 3s late in the fourth quarter to go 6-of-9 from the field and register 15 points.
For the Knicks, All-Star forward Julius Randle led the way with a near triple-double of 35 points, nine assists and eight rebounds. Former Celtic Evan Fournier scored 32 points, which included the go-ahead 3-pointer in the second overtime to finish 6-of-13 from beyond the arc and RJ Barrett added 19 points after having zero in the first two periods.
Brown had 25 (20 in the first quarter) of the Celtics' 58 points at the half, as they led by only four. The Knicks defense tighten up in the third period on Brown and he scored only four points while New York took an 86-82 advantage into the fourth.
The Celtics trailed 109-98 with 4:28 left in regulation before Grant Williams hit back-to-back 3s and Brown made a layup to cut the deficit to three with 1:09 remaining. Following a failed defensive set, Fournier hit a driving layup to put the Knicks up four leaving 9.0 seconds on the game clock.
Brown's 28-footer made it a one-point game and Randle was immediately fouled, hitting two free throws on the other end with 4.8 seconds left, leaving just enough time for Marcus Smart (15 points) to nail a right elbow 3 as time expired to send it to overtime.
Fournier's three straight 3's in the first 1:20 of the extra period made it interesting for the home team and a Tatum 3 tied it up 128-128. But neither team scored in the final 2:58 as fatigue was starting to become a factor.
Tatum's 3-point play with 1:05 left in the second OT gave Boston a a 134-133 lead. But Fournier put the game away with his fourth 3 of the double overtimes and Derrick Rose added another bucket to make it a four-point lead with 22 seconds to play as New York held on to the win.
In the end the Boston's tired legs didn't defend well enough, as the Knicks shot 48.6% from the field, including 60 points in the paint.

"I think we missed some shots. Obviously, I blew a layup -- which was kind of embarrassing but I think we missed a lot of shots," Brown replied. "Defensively, we need to tighten some things up. Just get back at communicating. It was loud in there. Those New York fans are always loud. We could have communicated a little bit better. We let Fournier get going towards the end. That just can't happen. You know, kudos to them, they played well tonight.
"But I don't think we played as well as we possibly could but I’m excited. I'm excited for this team, for this journey."

Meanwhile Boston hit 41.0% of their shots and 21-of-57 from 3, scoring only 42 points in the paint while turning the ball over 18 times.
The Celtics will head back home Friday night for their TD Garden season opener against the Toronto Raptors (0-1).
Game Notes:
Boston finished with 34 assists on 48 made buckets and had 13 total steals. The Knicks had 27 assists on 51 made shots. Jaylen Brown's 46 points is the most in franchise history for a regular season opener. Former Celtics All-Star Kemba Walker scored 10 points to go along with eight rebounds in his New York debut, while playing 36 minutes.
Joel Pavón
Follow @Joe1_CSP