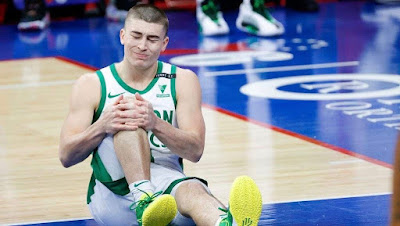 Celtics are currently on a three-game skid, after dropping back-to-back tilts to the 76ers in Philadelphia this week and the team also found out that they'll be without Payton Pritchard for the immediate future.
The rookie injured his right knee when teammate Jaylen Brown went for a rebound and fell into Pritchard's right leg on the way down, before the rookie guard hit the floor immediately grabbing his knee in pain and needed to be helped off the court.

Payton Pritchard looked like he was in a lot of pain. Here's the clip of Jaylen Brown falling into his right leg: pic.twitter.com/JHjZyORzSg


Shortly after Pritchard was taken to the locker room it was announced that he had suffered a sprain right knee and would not return. Celtics coach Brad Stevens provided a brief update on the injury during his postgame presser.

"He's out for the next couple of days," Stevens said following the Celtics 122-110 loss. "I don't know beyond that. I'm sure there's tests and stuff set up for (Saturday)."

While Pritchard only played two minutes prior to his injury, Stevens was limited to who he thought could provide some defense on the perimeter. The Celtics opted to go with Jeff Teague and with Jayson Tatum already out of the lineup, the Sixers took full advantage. All-Star Ben Simmons and Seth Curry each finished with 15 points respectively, combining for 13-of-20 made attempts.
The Celtics are scheduled to host the Cleveland Cavaliers, Sunday night at TD Garden before flying to Chicago to play the second night of a back-to-back against the Bulls Monday.
Pritchard will be sorely missed for his production on both ends of the floor, while being a vital piece coming off the Celtics bench. He's averaging 8.3 points and 2.8 assists in just over 22 minutes per contest this season.
***UPDATE:
According to the Celtics injury report, Pritchard has a Grade I right MCL sprain, following an MRI on Saturday afternoon and will be sidelined for about two weeks. Tatum is also listed as out against the Cavaliers, due to still being in heath and safety protocol.
Joel Pavón
Follow @Joe1_CSP