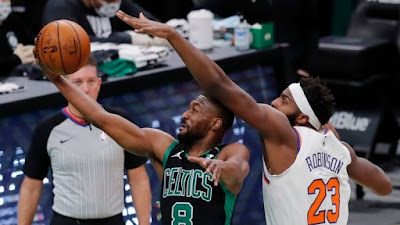 The New York Knicks came into TD Garden and handed the short-handed Celtics a 105-75 blowout loss on Sunday afternoon to snap a five-game win streak.
Kemba Walker, who's been rehabbing a left knee injury, made his much anticipated season debut only to have the Knicks spoil the point guard's return with a 30-point beatdown at home. The Celtics upgraded the All-Star from questionable to available just hours before tip-off, as he finished with nine points on 3-of-13 shooting, four assists and three rebounds in 20 minutes of limited action.
Walker did leave to the locker room at the end of the third quarter after taking a shot in the ribs from Knick's big man and Massachusetts native Nerlens Noel. But he did make his way back to the Celtics' bench at the start the fourth quarter.
Jaylen Brown scored a game-high 25 points (9-of-20 shooting) and Marcus Smart was the only other Celtic to reach double-figures in scoring with 10 on 4-of-15 attempts from the field. Jayson Tatum missed his second straight game, along with Robert Williams (third) who have both tested positive for COVID-19.
Julius Randle led the Knicks with 20 points, 12 rebounds, while RJ Barrett also notched a double-double with 19 points and 11 rebounds. Immanuel Quickley added 17 points, eight assists and Obi Toppin chipped in 12 off the bench for New York -- and are now 6-8 on the season after losing their previous five straight games.
The Knicks never trailed, as they jumped out to an 11-point lead to start the game then a 15-point advantage in the second quarter. That eventually turned into 58-35 Celtics deficit to begin the third after a 10-0 run by New York, as the C's never got any closer than 18 the rest of the way and were down by as much as 37 at one point
Boston shot a horrendous 29.8% from the field, including going 7-of-46 (15.2%) from behind the arc. It wasn't much better at the free throw line, hitting 18-of-29 from the charity stripe.
The Knicks forced 18 Celtics turnovers and shot 47.5% from the floor overall (38.7% from 3). They also won the battle on the boards 53-43 and assisted 22 times on 38 made baskets to Boston's 15 on 25 made shots.

"We had a clunker today," said coach Brad Stevens. "It happens to every team in the league, and it's our job tp make sure it doesn't happen again anytime soon."

The Celtics, 8-4 on the season, have the next few days off before heading to Philadelphia for a two game set with the 76ers on Wednesday and Friday.
Game Notes:
The 35 points was the Celtics' lowest-scoring half of the season, while Boston's previous lowest scoring game was 93 points against Detroit back on New Year's Day. The biggest blowout before today was a 28-point loss to the Nets on Christmas. The 75 points ties as the lowest scoring output for the Celtics in the Brad Stevens era. Shooting 29.8% was the franchise's worst field-goal percentage in a game since Jan. 5, 2004 in a loss to the Pistons.
Joel Pavón
Follow @Joe1_CSP