Romeo Langford could be sidelined of Celtics, Sixers' series with wrist injury 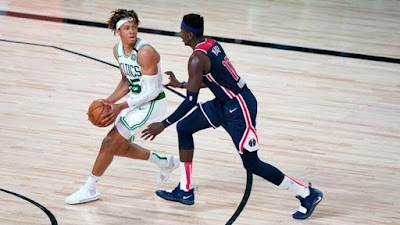 Celtics rookie Romeo Langford suffered a wrist injury in the team's 96-90 loss to the Washington Wizards on Thursday night.

Langford, who tore ligaments in his right wrist, has not been ruled out for the first-round series between Boston and the Philadelphia 76ers -- which tips-off on Monday night.


Sounds like Langford could possibly play with the torn ligaments depending on his pain threshold. To be determined. #Celtics
— gary washburn (@GwashburnGlobe) August 15, 2020


"We're still going through the process of determining the next step with him," coach Brad Stevens said Saturday. "I don't know if that means that down the road he'll have to take time off, if that means he'll have to have it worked on, but they're still in the process of determining how he feels and whether or not he'll be available or not. I'd say it's questionable."

In 32 games this season Langford averaged 2.5 points and 1.3 rebounds per contest. He played a career-high 30 minutes in the loss to Washington, mostly due the Celtics' top six rotation players sitting out to rest.

Langford has gained Stevens' trust as a defender as of late, despite his rookie campaign been hampered by injuries and could be in line for increased playing time in the playoffs. Celtics forward Gordon Hayward is expected to leave temporarily at some point in September for the birth of his son, and Langford could have a bigger role if he is available. But there is also a possibly he might be sidelined for the season.

Outside of this latest wrist injury, Langford had surgery on his right thumb to repair torn ligaments which forced him to miss summer league with the Celtics a year ago. He also was out earlier this season with two ankle injuries.


"I feel for him," Stevens said. "He's a hard-working guy, he's a tough guy and I think he's got a bright, bright future. Again, I hope that he's able to play, but that's going to be totally dependent on our doctors and dependent on his, probably, pain. So he's going to have to test that and get used to it and see what it feels like. If not, then we'll have him back when we have him back."