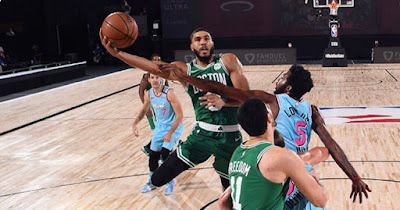 The Celtics once again fell into a double-digit hole for the second time in the Orlando bubble, as the Miami Heat made a statement without their star Jimmy Butler in a 112-106 loss Tuesday.

The Heat, who are now 43-25 and playing on a second night of a back-to-back after losing to the Toronto Raptors, cut Boston's lead for the No. 3 seed down to 1 1/2 games.

Jayson Tatum led the Celtics with 23 points, while Jaylen Brown notched a double-double of 13 points and 10 rebounds. Gordon Hayward and Kemba Walker (26 minutes) each added 15 points and Enes Kanter scored 10 off the bench.


"We let our emotions play too much of a part today," Tatum said. "We've just got to do a better job of just focusing on what we can control and not worry about other things."

Boston found themselves getting frustrated with foul calls, as Marcus Smart fouled out with 3:46 left in the third, just moments after Hayward picked up only the third technical foul of his career. The forward was screaming obscenities to an official when he got called for a charge in the middle of Celtics' 11-4 run to get within three. Tatum had five fouls late in the fourth and also got hit with a technical -- the team overall recorded 26 total fouls.

Bam Adebayo finished with 21 points and 12 rebounds for the Heat, who led by as many as 16 points and Duncan Robinson also netted 21. Goran Dragic added 20 and former Celtic Kelly Olynyk (started in Butler's place) chipped in 15 points, eight assists.

The Celtics went on a 16-3 spurt to start the second half, capped off with an alley-oop dunk by Daniel Theis (11 points, five rebounds) from Tatum to pull within one 69-68. The Heat went on a 14-2 run of their own and all the momentum was in their favor following Smart leaving the game. Walker hit a 50-foot buzzer beater to end the third and cut Miami's lead back to single digits 91-83.

With 1:26 left in the final frame, Walker made a 3 and Theis hit a pair of free throws before Dragic was called for traveling. Walker hit another 3 with 19.8 seconds remaining to get the Celtics within three 109-106, but they wouldn't score again the rest of the way.

Boston, who never led once against the Heat, fall to 44-23 on the season and 1-2 in the NBA restart.


"We weren't solid, and they exposed that," Celtics coach Brad Stevens said. "Our defense has to improve from what it's been in the three games or so. Credit Miami. They played with unbelievable intensity and togetherness tonight."

The Celtics will look to re-group without Kemba Walker (rest) when they face the Brooklyn Nets (32-35), who are coming off a huge win against the Bucks, on a second night of a back-to-back Wednesday night.

After shooting well over 50 percent from the field and hitting 18 3's in their win over the Trail Blazers, the Celtics only shot 43.5 percent against Miami and 10-of-33 from behind the arc. The Heat also made it to the free throw line 39 times versus Boston's 22.