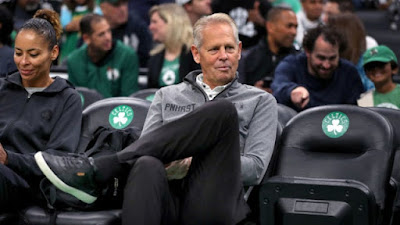 The Celtics didn't reach their ultimate goal this season of competing for a championship after losing to the Miami Heat in six games during the Eastern Conference Finals.

President of basketball operations Danny Ainge made his last weekly appearance of the 2019-20 campaign on Boston's 98.5 Sports Hub Thursday morning.

Though Ainge was disappointed with how the season ended for the Celtics, he remained optimistic about where the team is heading.

"We're in a pretty good place," Ainge said on of the team's future. "But yeah that was a tough loss, no doubt about it. It was not good, not good play in that series because it was so promising in those first two series. We could've played better in that last series.

"I think that we felt it was a series that we should win," Ainge added. "I think in hindsight, we still look at it as a series that we should've won, and could've won, without disrespecting Miami because they were playing really well, and they were all healthy, and fresh. There are a lot of reasons, you can go back and try to figure it out, but I think that we didn't play well down the stretch in games, and that had been something that we'd done all year and during the playoffs."

Ainge also addressed the team being injured at different points of the season as also a reason for the Celtics not making it out of the East.

"The bottom line is I'm not going to get too stressed about it," Ainge explained. "We for sure were not 100 percent. We have guys banged up."

One of the players that Ainge expressed concerns about their health is All-Star guard Kemba Walker, who came to the Celtics' mini training camp in the Orlando bubble still rehabbing a knee injury from the beginning of the calendar year.

"I could see even when he was here before the bubble started, which is why he shut down a little bit and doing strong training and trying to prepare himself for the playoff run," Ainge said. "But he was definitely not himself. In fairness to Kemba, he doesn't want to say that to you; the media. He doesn't want to say that to me. I haven't heard one excuse from him but watching the games, even the games we won, even the games where he played well, I could tell he wasn't the same physically as he was in October, November, December."

Walker in his first postseason with the Celtics had a strong showing, while averaging 19.6 points and 5.1 assists per game. Ainge was asked if Walker's health will be a concern going into the offseason.

"Probably over the next week-to-two weeks we will have a full plan for Kemba in the offseason, regardless of what the medical tests come back and everything else," Ainge said. "There's no surgery needed or anything else that I'm aware of at this time."

Ainge also spoke about Gordon Hayward and how pleased he was with his overall performance this season, despite an ankle injury that caused the Celtics forward to miss five weeks of playoff games.

"He really wanted to help our team, but you could tell that he was not the player that he had been most of the year," Ainge said of Hayward. "He had a terrific season."

Hayward, 30, has a player option worth $34.2 million that he could exercise or opt out during this offseason to become a free agent. The Celtics forward had his best season as a Celtic, putting up 17.5 points on 50-percent shooting from the field, 6.7 rebounds and 4.1 assists per game. Ainge was asked if the team had any sort of idea if Hayward would pick up the option.

"It's a good question, I don't know the answer to that," Ainge admitted. "The league is trying to figure out when free agency starts, we don't know for sure. We think we have a pretty good idea of when the draft is going to be, but it’s not set in stone either."

"It is strange, no question," Ainge said of the upcoming NBA offseason due to the uncertainty of COVID-19.

Ainge pointed to the team's health once again when it came to the topic of a possible midseason acquisition for depth purposes didn't happen.

"First and foremost is health," Ainge said. "I think it's a fair assessment. I think part of the reason we didn't have different players on the bench was, first of all, we worked very diligently to upgrade our bench going into the playoffs, but the price was too high or they were silly acquisitions where we weren't even sure they were that much better.

"We started to get [Romeo Langford] back healthy," Ainge said of the team's top pick in last year's draft. "And we really like him. He is a good player, and I know that nobody knows that yet in Boston. They haven't seen him. The two games that we played against Miami that we won, we scored 56 points in the paint in the last three quarters and we scored 60 points in the paint in another one. That's [Romeo's] strength, scoring in the paint. He didn't even get a chance to show much of that this year."

Langford's injury-riddled rookie campaign came to an abrupt end over a week ago, following season-ending surgery on his right wrist, something Ainge believes added to the team's second unit woes.

"Going into the season, we liked our bench," Ainge continued. "We were always going to have three of five main players on the court at all times. We were going to play the center by committee, and so we liked our core players opposite them. But because we had injuries with Kemba and Gordon, and [Romeo], that hurt us. And that exposed our bench a little bit at that point."

With the 2019-20 NBA season coming to a close, Ainge summarized the bubble experience as a good one."I think the league has done an amazing job. I think the product has been great," said Ainge

But Ainge was definitely not too pleased with the NBA Finals after one game so far.

"I didn't think last night's game was great," Ainge added of Wednesday's Game 1 between the Lakers and Heat. "I'm not sure which was worse between last night's game and the presidential debate from the night before."