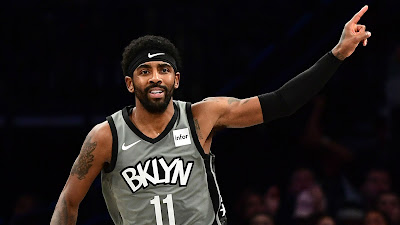 It shouldn't come as a shock that former Celtics players have criticized Nets All-Star Kyrie Irving for his short lived two-years in Boston.

Future Hall-of-Famer and Celtics legend Paul Pierce said Irving deserved "one of the loudest boos in league history" due to his "front-runner mentality" when he'd eventually make a return to the TD Garden for the first time, which was suppose to happen back on Thanksgiving Eve.

Kevin Garnett wasn't surprised Irving took his talents to Brooklyn last summer because according to the Big Ticket you need "some major cojones" to play in Boston. While even former Celtics enforcer Kendrick Perkins said he "lost all respect" for his ex-Cavalier teammate following Boston's early second round exit to the Bucks.

Irving, who hasn't played since Nov. 14 due to a shoulder injury, has finally broken his silence and has responded to the criticism of the former Celtics stars in a recent interview with New York sportswriter Mike Mazzeo.


"The big picture, when I started playing basketball, you realize that a lot of variables come into play with all this. I do it because I love it. But at the end of the day, it's entertainment. Fans love to be entertained, and I think that I myself kind of fell into that cycle of being emotionally attached to something like that, especially when I'm watching the game at home with my family, much to the fact that it wasn't about the players on the floor during that day. It became about me and where I was and what I was doing. For basketball to become more about just one individual player, and it’s a team sport, just to justify market value or bringing more fans to the games or justifying why all that stuff happens, so be it. That's entertainment.

I've got nothing but love for Boston, nothing but love for the journey I had with all those guys. I appreciate everyone standing up for me and speaking on my behalf and telling it's not all my fault, it's not all on him. I'm a man. I'm able to take criticism. I haven't taken it well in the past. But at this point in my career it's just the big picture that I need to focus on winning a championship here and how do I make this organization better and we move forward from that point.

Irving didn't make the trip from Brooklyn to Boston in the first meeting of the season between the Nets and Celtics on Nov. 27, where several chants of "Kyrie Sucks" broke out at TD Garden. The former C's point guard took to Instagram almost immediately following the loss to voice his thoughts on those Celtics fans that were booing him while he wasn't even there.

Two days later in Brooklyn, after Irving's favorite holiday, the Nets got their revenge as Boston lost with Irving and Kevin Durant in attendance at the Barclays Center.

While Irving's former Celtics teammates like Marcus Smart, Jayson Tatum and even more recently Jaylen Brown have been nothing but positive in defending the All-Star point guard and that he shouldn't shoulder any blame for the disappointing 2018-19 season, Pierce, Garnett and Perkins have kept it 100 percent when it comes to their feelings on the Irving-Era in Boston.

It's unknown when Irving will return to any basketball related activities, as the Nets guard has only played 11 out of the team's total 36 games. Following a cortisone shot on Monday he's waiting to see how his shoulder responds within the next few weeks before a decision is made on possibly having season-ending surgery.

The Nets come back to Boston on March 3 and the Celtics will head to the Barclays Center on March 21 to wrap up their regular season series, which is currently tied 1-1.