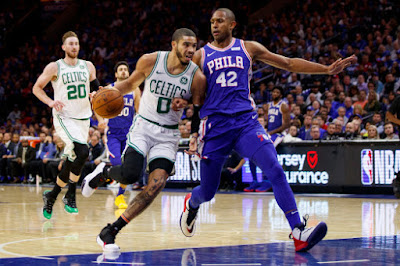 Former Celtics big man Al Horford believed he'd have a significant role when he bolted to Philadelphia to sign a four-year, $109 million deal with the Sixers in July.

Despite the 76ers being 23-13 so far this season, they are currently riding a three-game losing streak and Horford doesn't seem pleased with this role in the team's offense either.


"It's not as good as I want to be," Horford said Monday of his season to Philadelphia Inquirer's Keith Pompey. "I still haven't been able to find my rhythm with the team."

Though Horford is putting up more shots than his two previous seasons in Boston, he ranks fourth behind Joel Embiid, Tobias Harris and Josh Richardson at 11.3 attempts. He's averaging near career-lows in points (12.4), rebounds (6.5) and assists (3.8) through 32 games, while shooting 45 percent from the field and 34.1 percent from behind the 3-point arc.


"I'm out [there] for the team and doing what I can to help us. But offensively, I'm very limited with the things that I can do. So I can't control that stuff." [Philadelphia Inquirer]

It was clear that Horford was able to adjust much better in Brad Stevens' free flowing offense, but so far the same can't be said for the 33-year old in Philadelphia, as the 76ers' offense runs primarily through Ben Simmons and Embiid.


"It's always an adjustment period when you are with a new team," Horford added. "Things don't necessarily click how you want them to. It's just a different challenge." [Philadelphia Inquirer]

Horford in his last seven games is averaging 8.7 points on 38.6 percent shooting and 5.4 rebonds per contest, as he's openly voicing his frustrations about wanting to have a bigger role in the 76ers' offense.

While the Celtics are second in the Eastern Conference standings at 23-8, the Sixers sit in sixth and have plenty of time before the playoffs to make adjustments if they want to be taken serious as title contenders.