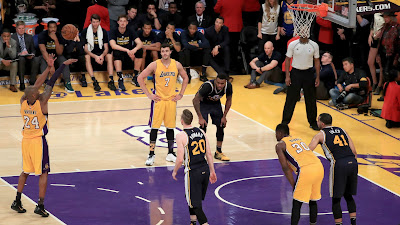 In the wake of Kobe Bryant's tragic death, Celtics forward Gordon Hayward wanted to make sure to set the record straight regarding Bryant's final NBA game.

Hayward, a member of the Utah Jazz back during the 2015-16 campaign, played against Kobe Bryant and the Los Angeles Lakers in the last game of the regular season, and it was Bryant who dropped 60 points in a comeback win to end his legendary 20-year career.

On Monday, a clip was circulating where Bryant is shooting two final free throws at the end of the fourth quarter in the very same game against the Jazz, which would have given him his 60th point and Hayward appears to walk into the lane a bit early as Bryant is attempting the second free throw.

Though Bryant made both free throws and no lane violation was called by the officials, NBC Sports' Mike Tirico, who was working for ESPN at the time and called the game that night, may have suggested on The Ringer's Ryen Russillo Podcast that Hayward purposely committed the lane violation to ensure that Bryant would get another chance to hit the 60-point mark in case he missed the free throw.


"That, to me, was the most unique example I could give to people of the fraternity of the NBA. And the reverence for greatness in the NBA is at a different level that any of the other sports that we watch or cover.

He had the complete wherewithal at 59 to just put a foot in the lane and look over at the ref just in case Kobe missed it to make sure he got another shot at 60.

That is just one of those things that nobody ever remembers, that very few people see, but every time I see Gordon Hayward, I think of that. I'm like, 'You know what, dude, you get it. You get it at a level that other people don't and I'm a fan of yours for life for that."

While ESPN re-aired Bryant's epic performance against the Jazz Monday night, Hayward took to Twitter to deny what Tirico and more than likely many others that the now Celtics forward was displaying great sportsmanship by intentionally trying to commit the lane violation.


"The past day has been incredibly heartbreaking for me. Kobe is someone that I looked up to and admired and developed a personal relationship with. I have struggled so much with trying to understand the devastating news and like many others I'm still trying to process it."

"It has also come to my attention that there is a story going around tonight about an intentional lane violation that I took to ensure Kobe would get his 60th point in his final game and many are applauding me for the gesture. The fact of the matter is that is not true."

"That was a night that I will truly never forget as I can remember almost every moment of it and my goal that night was to compete as hard as I possibly could against Kobe because that is what he was all about and I wanted to give him my very best."

"He got 60 on me and I didn't give him anything free all night. What happened on the free throw line was not intentional. Kobe would have lost respect for me if I gave him something free. That's what made him so very special!"

"Rest In Peace Kobe. I'm so honored to have shared our time on and off the court together!"

Hayward was asked about what stood out the most about that game on Tuesday and the former Jazz forward didn't hesitate to answer when remembering his last matchup against Bryant.


"Just the whole thing," said Hayward. "I wrote a blog about it when it happened. The atmosphere was electric and something I probably won't ever be part of again." [NBC Sports Boston]

Obviously, that's a great memory to have and even an historic moment to be a part of for Hayward, who may or may not have been indirectly one of the reasons that Kobe in his finale dropped 60. Either way, that will be one hell of a story to tell his children and even his grandchildren one day.

Bryant and his daughter Gianna, along with seven others were killed in a helicopter crash on Sunday morning in Calabasas, California.