Jaylen Brown out against the Grizzlies with ankle sprain 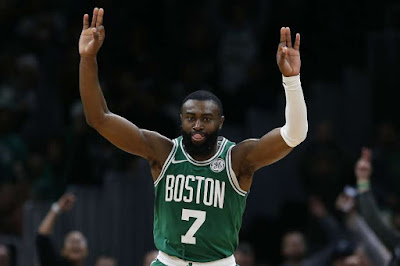 It didn't take long for Jaylen Brown to make his way back to the disabled list following the Celtics blowout 139-107 win over the Los Angeles Lakers Monday night.

Brown, who was officially listed as questionable for Wednesday's matchup against the Memphis Grizzlies due to a right ankle sprain, has now been ruled out by the Celtics.


#NEBHInjuryReport Jaylen Brown has been ruled out for tonight’s game due to a right ankle sprain.
— Boston Celtics (@celtics) January 22, 2020


According to Brown, he may have suffered the injury during the fourth quarter against the Lakers, when he was seen limping a bit. Monday's victory marked Brown's return to action after missing the previous two Celtics losses to the Suns and Bucks with a sore thumb.

This will be Brown's seventh missed game this season and while he's averaging career-highs in points (20), rebounds (6.8) and assists (2.4), he may still be on the bubble of being selected as an All-Star this year. But after his emphatic dunk on LeBron James, Brown is definitely making a strong case to get that call to Chicago for the NBA's midseason classic next month.


The Celtics host rookie Ja Morant and the Grizzlies tonight at TD Garden, while tip-off is slated for a 7:30 p.m. ET start.