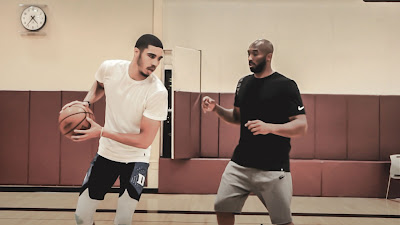 On Tuesday in Miami, Jayson Tatum spoke about Kobe Bryant for the first time since the tragedy that took his life, his daughter and seven other souls in a helicopter crash 48-hours prior.

The Celtics forward, who hasn't played basketball in a week due to a groin injury, called Bryant his hero growing up and later a mentor once he entered the NBA. Tatum attempted to put into words what Bryant meant to him when he talked to the media, following the team's morning shootaround at the AmericanAirlines Arena.


"It meant the world. Everybody knows how much he meant to me," Tatum said, as the Celtics were getting ready to take on the Heat. "He was somebody I really looked up to, and really was like my hero, the reason I started playing basketball. To becoming a friend and mentor, somebody who I could talk to and help me out with a bunch of things, on and off the court. It's been a tough couple of days."

Tatum declined to speak with any reporters on Sunday hours before the Celtics tipped-off against the Pelicans in New Orleans, just shortly after the news of Bryant's tragic death had been confirmed.

While the Pelicans, along with the Smoothie King Center both played homage to Bryant and many Celtics players spoke with the media about the difficult task of playing a basketball game, following the 123-108 road loss, Tatum remained quiet despite his own tributes to his childhood idol on social media. But he did open up about his relationship with Bryant on Tuesday.


"It was such a surreal moment, for me. Just being in his presence, and being able to work with him," said Tatum. "Even in that moment, all I could think about was he was the reason I started playing basketball. To have him reach out and try to help me, and want to work with me, was something I will never forget."

So what made Tatum want to be like Bryant the basketball player and or what was the most gravitating thing about the Lakers' superstar?


"Everything. How hard he worked, his compassion, his drive, his work ethic to be the best," said Tatum. "It just made me fall in love with him, and the game. I loved everything about him. The way he carried himself. He was special."

Tatum expressed gratitude when referring to his summer sessions with Bryant and whenever they worked out together, as a crucial part of his development.


"It was everything, just for him to reach out and want to help," said Tatum. "He didn't have to. After he retired, he had his family and everything else he was invested in, so I was greatly appreciative of the time I got to spend with him, and things like that."

The rising Celtics star was asked what he thought Bryant's legacy should be and Tatum didn't hesitate with a response, when it came to being a loving husband and father.


"Obviously, everybody knows how great of a basketball player he was, the tremendous things he did on the court," said Tatum. "After he retired, you could really see how much he loved his family, his wife, his kids, how much he enjoyed being around them and spending time with them. I guess just how great of a father he was. I think people should shine light on that more."

Tatum, 21, is in his third year in the NBA and is having an All-Star type season so far, as he's averaging career-highs in points (21.5), rebounds (6.9) and assists (2.9). While his two-year old son Jayson Jr has been known to steal the show during postgame press conferences from time to time, which is what both Tatum and Bryant had in common, among other things. But after Tuesday's media scrum, it's also clear that their relationship stretched way beyond just basketball.