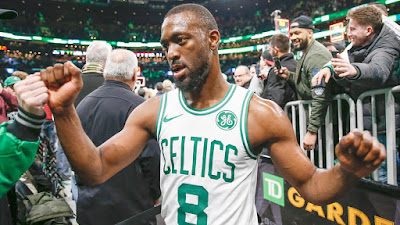 The NBA announced that Kemba Walker will be in the starting backcourt for next month's 2020 All-Star game. It's the point guard's second straight year being voted in as a starter and fourth overall selection.

Walker will be joined by the Hawks' Trae Young representing the Eastern Conference starting backcourt. Though Walker was third among East guards in the fan voting, behind Young and the Nets' Kyrie Irving, he was first in the media and player voting.


⭐️ @KembaWalker IS A STARTER IN THE ALL-STAR GAME ⭐️


The 29-year old Walker is averaging 21 points, 5 assists and 4 rebounds per game in his first season in Boston, while shooting 44.3 percent from field, 39-percent from 3 and 86.3 percent from the free throw line. Walker becomes the first Celtics guard to get voted in as starter since Rajon Rondo in 2013.

NBA coaches will vote to decide the reserves, which will be announced on Thursday, Jan. 30. Jayson Tatum finished fifth among Eastern Conference frontcourt players, while Jaylen Brown finished ninth when it came to Eastern Conference guards. Both Brown and Tatum still have a shot to make their first respective All-Star selections in the next six days.