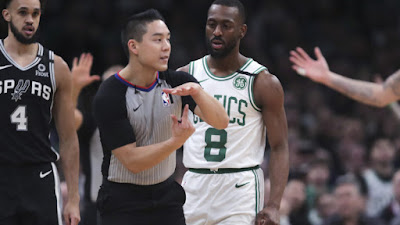 The pick by LaMarcus Aldridge on Kemba Walker was a hard one, but not illegal - at least as defined by the officials.

Looking closely at the play repeatedly, that appears to be the case - no obvious foul. The real issues were the two protests by Kemba Walker to the no-call by the officials - the quick ejection of the two-time NBA Sportsmanship award winner who had never been tossed in his entire career - and the throwing of a beer can onto the parquet by a fan who was quickly identified and escorted out of the arena.


The protests to the officials were certainly un-Kemba-like, but understandable to an extent. Walker truly felt he had been fouled. But the second technical following his additional outburst seemed just a bit too quick. The officials probably needed a longer fuse on that second technical.


"It was the first time I had been ejected in my whole life," Walker said. "I am a two-time sportsmanship award winner as well so maybe I should get a little bit of leeway. I have watched a lot of basketball and I've seen other guys do a lot worse but like I said the choice was his and he made it. He got me out of there and what can I do?

"Just really forget about it at this point. We lost, I got ejected and we have another one tomorrow."


There was also a throwing of a beer can, which was fearfully reminiscent of the infamous Malice at the Palace fracas when a Detroit fan threw a cup of beer onto the Pacers Ron Artest back in 2004, as the "Basket-Brawl" that followed was frightening. Security at TD Garden is tight, and their staff act quickly to avert escalation of such an incident.

The Spurs went on to beat the Celtics 129-114 and coach Brad Stevens apologized to a very-upset Gregg Popovich for the actions of the unruly fan, who was ejected from the arena and arrested. This game needs to be quickly forgotten - as quickly as that second technical was levied on Kemba Walker.

The Celtics take on the Philadelphia 76ers in a second night of a back-to-back, and after two losses in a row, they need to take it to the rival Sixers in the hostile environment of the Wells Fargo Center. That will erase all memory of what happened Wednesday night.