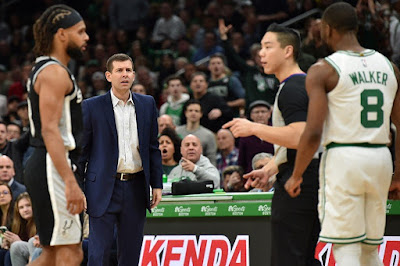 For a player who was ejected from a game at its most crucial point, Kemba Walker's lackadaisical attitude when he was asked about the back-to-back technical fouls that ended his night Wednesday came as a surprise.

He was the first to speak to the media in the Celtics locker room, following a disappointing 129-114 loss against the Spurs.

Marcus Smart shouted as he passed by Walker's locker and the two shared a laugh. It was as if the frustration of Walker's undeserving ejection had already rolled off their backs in the shower and was now just a punchline for teammates to look back on and laugh about.

Less than one hour removed from Walker's ejection, it felt too soon for jokes. Boston trailed by 23 -- its largest deficit of the season -- in the third quarter before putting together a 22-11 run, which pulled the Celtics to within seven.

Walker, who fell to the floor after running into a brick wall that was Spurs forward LaMarcus Aldridge, popped back up to his feet and made his way to referee Evan Scott, Celtics head coach Brad Stevens followed suit.

However, it was Walker's obscenity-riddled protest that earned him one technical foul and when the curses continued, Scott slapped the All-Star point guard with a second.


"Per rule, Kemba Walker used profanity towards an official, which led to the first technical foul," Official Crew Chief Rodney Mott told the associated press. "He continued to use profanity and was given a second technical foul and ejected."

Stevens was also hit with a tech, he was fired up by the no-call on Aldridge. His press conference was also a totally different vibe compared to his locker room.

For Stevens, the Celtics shouldn't have been in that situation in the first place.


"Whatever the call is; the call is," Stevens said. "Whatever Kemba (Walker) said to get kicked out, he said. Whatever I said to get a tech, I said. But, you know, obviously there was a lot we could've controlled up to that point and after that point, and played better. So it doesn't really matter."

What did seem to matter was San Antonio's 17-3 run that ensued. The Spurs' offense was electric. Led by DeMar DeRozan's game-high 30 points, it finished shooting at a 55.2 percent clip while Stevens spent the rest of the second half tinkering lineups hoping one could produce a game-defining run, but to no avail.


"I thought I was being nice," Walker joked at the center of Wednesday's media scrum. "I thought the ref missed a call and I just voiced my opinion a little bit. The rest was history."

It's interesting to see Walker take an absurd pair of technical fouls so lightly, considering the Celtics were on pace to grab their first lead of the night. With a chance to avoid its first set of back-to-back losses in nearly two months, Boston has to do its best to stay afloat in the midst of its most grueling part of the regular season schedule.

As a leader, Walker set a bad example. His ejection led to a game-changing run by the Spurs and instead of voicing his displeasure in a passive and playful manner, Walker should have used the opportunity to explain how unfair it was for the official to use such sharp judgment due to curse words spewed from the Celtics point guard's mouth, or at least, do just about anything instead of cracking jokes.


"It was the first time I had been ejected in my whole life," Walker said. "I am a two-time sportsmanship award winner as well so maybe I should get a little bit of leeway. I have watched a lot of basketball and I've seen other guys do a lot worse but like I said the choice was his and he made it. He got me out of there and what can I do?

"Just really forget about it at this point. We lost, I got ejected and we have another one tomorrow."

If Walker wasn't ejected after addressing an official with curse words, he wouldn't have been the first. It happens on a nightly basis in the NBA, and unless Scott was setting a precedent, Walker does make a valid point about his squeaky-clean track record. It should have worked in his favor in this situation but that's not an excuse for Walker's behavior after the game.

Hopefully, we'll see him take losses -- ones determined by his actions -- like these a bit more seriously moving forward. The Celtics are only 14 wins away from reaching the Hornets' season win total of last year's campaign. If there's one player on the Celtics' roster who's used to losing NBA games, it's Walker -- which could explain his laid back attitude following the Celtics' 10th loss of the season.

Still, Walker should take losses like these more seriously, considering his team's play prior to the ejection and the ripple effect it had on the Celtics.


"We didn't play hard enough," Stevens said. "San Antonio played hard; we didn't. San Antonio played great. We hoped if a few shots went in that we could stay afloat but we're not playing hard enough, last two games. Bottom line. Other teams deserve credit for beating us. Washington played great. I don't want to take anything away from them. San Antonio was awesome. They were awesome against the Bucks. But if you're not going to play to your max then you're going to get beat in this league, often badly."

Gordon Hayward scored 18 points, Jaylen Brown added 16 and Daniel Theis poured in 15 points, the three led the Celtics in scoring. Boston will complete the second leg of a back-to-back set that ends in Philadelphia Thursday night.

Spurs: Scored 50 points in the paint and converted 48 made field-goals off of 28 assists