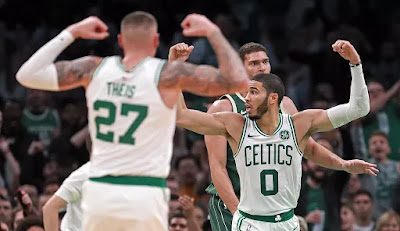 Jayson Tatum will be watching his team take on the Pistons without him Wednesday night at TD Garden.

The third-year forward is experiencing knee soreness, Brad Stevens told the media at team shoot around.


"He's got a little bit of tendinitis that we just want to be very cautious with," Brad Stevens said. "Reassess him tomorrow but it's not a long-term thing by any means." [Masslive.com]

For a team facing the first leg of a back-to-back, home-and-road set, giving Tatum the night off isn't a bad idea. As the lone starter who hasn't missed a single game this season -- Wednesday against the Pistons will mark his first -- it's fair to say he's earned it up to this point.

The Celtics' opponent Thursday night is as big as it gets. Giannis Antetokounmpo and the Bucks are the only team sitting above Boston in the Eastern Conference and Milwaukee also owns the best record in the league. Tatum sitting out against the Pistons is certainly more of a precautionary decision than anything as we could be in for an epic nationally-televised showdown between Tatum and The Greek Freak.

Meanwhile, Daniel Theis, who's been nursing tendinitis in his knee, will suit up against the Pistons. After missing Monday's matchup against the Bulls, Theis will return to Stevens' frontcourt and join Enes Kanter, Grant Williams and Vincent Poirier, who after for nearly a month out, returned to action Monday.

Theis isn't completely in the clear. He feels strong enough to face Detroit Wednesday, however, he says rehabbing will continue as he works his way back to full strength.


"I think it's kind of easy to get under control because I can do so much rehab stuff on the quad, just strengthen everything around it," Theis said. "That's what I've been doing the last couple of days."

Averaging 9.3 points, 5.5 rebounds, one block and one steal throughout January, Theis has given Stevens a handful of quality starts throughout that six-game span and will look to build on them Wednesday against Andre Drummond and the Pistons.