Pelicans 123, Celtics 108: Kemba Walker's 35 points not enough to pull off another rally 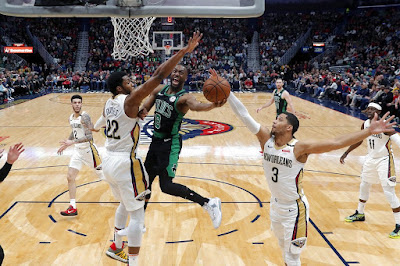 On a sad day where basketball should have taken a backseat following the breaking news of Kobe Bryant's tragic death, the Celtics and Pelicans still had a game to play, despite their hearts being heavy.

The show went on, as New Orleans avenged a loss in Boston nearly two weeks go, with a 123-108 win over the Celtics on Sunday.

While both teams learned of the helicopter tragedy that took the lives of nine passengers just hours before tip-off, the Pelicans, as did the rest of the NBA, honored Bryant before and during the scheduled games throughout the afternoon and into the evening.

At the Smoothie King Center, Bryant's photo was showed on the jumbotron while a tribute was read and there was a 24-second moment of silence. The Celtics and Pelicans then each paid homage by taking a 24-second shot clock violation in honor of the former Laker, who wore No. 24.


The Celtics got off to a poor start for a second consecutive game, falling into a double-digit hole in the first quarter and trailed 62-42 at half after hitting just 16-of-43 shots.

Kemba Walker looked to pull off another comeback, leading all scorers with a game-high 35 points on 10-of-24 shooting, including 4-10 from behind the arc. Gordon Hayward added 23 points and 6 rebounds.

Jaylen Brown netted 20 points in his return into the Celtics starting lineup after missing the last two outings with an ankle injury, while Daniel Theis chipped in 15 points and 9 rebounds in the loss.

It was the Celtics first official look at Zion Williamson and he lived up to the hype. In only the third game of the season for the Pelicans rookie, he notched a double-double of 21 points and 11 rebounds in 27 minutes of action.

Jrue Holiday led New Orleans with 25 points, JJ Redick scored 17 and Brandon Ingram contributed with 16 to snap a two-game skid, as they're now 18-29.

The Pelicans led by as many as 23 to begin the third quarter before Boston used a 7-0 run to cut the deficit to single-digits (87-79). In the final frame the Celtics got win six (97-91) of their first lead of the second half. But New Orleans scored five quick unanswered points to take a 102-91 advantage with 8:20 left to play and it never got closer than 10 the rest of the way for the Celtics, who got their three-game win streak snapped.

Jayson Tatum (groin) and Enes Kanter (hip), who were both a huge reason for the Celtics win over the Pelicans back on Jan. 11, missed their second straight game.

Boston is now 30-15, as Brad Stevens and his banged up roster will have one day to re-group before heading to face the Heat down in Miami on Tuesday night.

Despite the Celtics scoring 56 points in the paint and shooting 46 percent from the floor overall, they were 8-of-33 from 3 and were out-rebounded by the Pelicans 65-45.