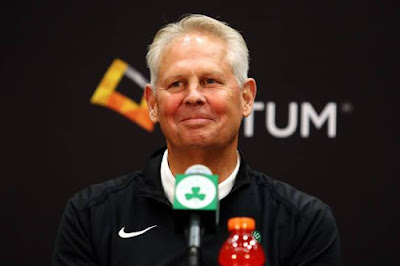 Danny Ainge has learned patience as an NBA Executive, but after going through an 11-year title drought, he may break his habit of not trading at the February deadline.

The Celtics bench gets mighty thin when injuries strike, especially with both Jayson Tatum (groin) and Enes Kanter (hip) out of action for the last few games. Brad Stevens has had to rely on Semi Ojeleye and rookie Grant Williams to fill the void as of late.

Though the duo combined for 12 points on 56-percent shooting (5-of-9) from the field, along with 10 rebounds and two steals off the bench in the Celtics 109-101 win over the Heat on Tuesday night, it would be tough to rely on Ojeleye and Williams for a long stretch.

There is simply no doubt that Boston needs to add a seasoned veteran to the fold. The only current Celtics core players that can be defined as vets are Kemba Walker and Gordon Hayward, with Marcus Smart barely missing the designation. Jamal Crawford as a free agent addition could still be an option and also Andre Iguodala as a trade-or-buyout pickup.

Boston's last NBA title was in 2008, and you can bet Ainge is getting antsy. With the possibility of injuries always lurking in the background, the Celtics bench is not sufficient to withstand the rigors and intensity of the postseason. With trade deadline only seven days away and the race in the standings getting tighter, the Celtics will look to lock down that second seed in the Eastern Conference, as they get prepared for the playoffs.


A trade for Iguodala is not out of the realm of possibility for Aine to consider. Vincent Poirier, Romeo Langford and Brad Wanamaker, along with cash, will get it done. This type of deal only flies if Ainge feels the addition of Iguodala and the possible signing of him for at least the 2020-21 season, will get his team to the Finals. Iguodala has already shown signs of affection for returning to Golden State, so a possible buyout of Iggy's contract by the Memphis Grizzlies might not work for Boston.

According to Sports Illustrated's Avery Wang, the Dallas Mavericks seem like the likely destination for Iguodala if the Grizzlies don't grant the 2015 NBA Finals MVP's buyout request.


"Some NBA executives are under the impression that the Dallas Mavericks are the Memphis Grizzlies' backup option in their season-long attempt to extract some value out of Andre Iguodala and his expiring, $17.2 million contract. Dallas' offer of Courtney Lee and the Warriors' second-round pick appears to be the best one on the market thus far, but the Grizzlies are continuing to shop around.

"The Warriors' pick figures to be near the top of the second-round and those picks are notoriously valuable. Their proximity to the back-end of the first-round make them, effectively, first-rounders without guaranteed contracts. (Second-round contracts need not be guaranteed.) That pick is currently slated to fall 33rd overall—the first pick of the second round. (Tim McMahon, ESPN)"

Admittedly, the trade scenario I have put out there would cost the Celtics quite a bit, and its chances of happening are slim. But the three-for-one deal would open up a roster spot for the addition of a buyout candidate later in the season, so don't rule it out entirely. Ainge may just pull the trigger on a mid-season trade yet.