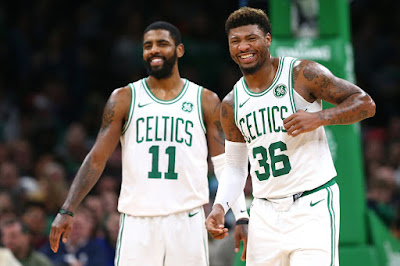 While reports continue to speculate what went wrong with Kyrie Irving and the 2018-19 Celtics, Marcus Smart believes the entire team is to share the responsibility of a disappointing season.

Smart made a TV-appearance on ESPN's The Jump Monday afternoon and spoke about a variety of topics, including last year's team chemistry, which was not always the greatest.

Despite most Celtics fans wanting to name Irving as the sole culprit for this past season's struggles, Smart defended the All-Star point guard, as he revealed that Irving was one of the first to get in touch with him when Smart's mother passed away last summer.


"For me personally, I can't speak for other guys, but for me personally, Kyrie is a great teammate," Smart said. "I've had sit-downs with Kyrie where things for me probably wasn't going so well where he was pulling me to the side — and it wasn't even about basketball. Everybody knows what I went through with my mom, losing her and everything. Kyrie, one of the first guys to text me, call me. When I got back to Boston, pulled me to the side and we'd sit down and we'd talk.

"As far as basketball, just helping me slow the game down and really recognize and understand the game even more. So as a teammate, I loved him for it. That leadership that he's been trying to show people that he has, he had it ... he's just misunderstood."

The Celtics won six fewer games than they did the season before, while getting knocked out during the second round to the Milwaukee Bucks 4-1. Irving shot 36 percent from the floor for the series, as the team's power struggles, something that was lingering all year long, were magnified even more so at the worst possible time.

But when it comes to the Celtics' shortcomings last season, Smart divides the blame pie evenly.


"Let's call a spade a spade, right? It's true," Smart replied when asked about the 2018-19 Celtics being called dysfunctional. "We were dysfunctional, you know. It takes a lot for guys, especially athletes, to own up to that and say 'yeah, things didn't go quite the way we wanted', but we've gotta look ourselves in the mirror, 'what did I do, what could I have done to help?' Like I said, we all took part in it, we all could have done something better to help that team."

Smart also pointed out, just as other teammates have said since their season ended, that off the court they seemed to get along just fine. It was during games where the Celtics didn't always get it together.


"Off the court, we actually hung out with each other," Smart said. "Things got on the court (and) it was just, everybody was put in a situation, trying to help the team the only way that they knew how. We had guys doing what they knew — we had guys scoring the ball. It's what they do. They don’t know anything (else), it's what they do. That's how they made their name, and you're asking guys to take a step back and not be themselves. And that was hard for a lot of guys. It's hard for anybody to have to look themselves in the mirror and sacrifice something and that's just what it was for us. Everybody was trying so hard to help the team but they didn't know what exactly to do."

Of course Smart spoke of his invite to Team USA's training camp roster, where he'll join Jaylen Brown, Jayson Tatum and new teammate Kemba Walker next month. The four Celtics' players will have a shot to be one of 12 that will compete in the FIBA World Cup in China. Smart argues that those who will represent the U.S. this summer, should have priority for next year's 2020 Olympics in Japan.


On The Jump, Marcus Smart says the guys playing on this year's Team USA should be given priority for making the next team competing in the Olympics because they're the ones putting in the work to qualify
— John Karalis 🇬🇷 (@RedsArmy_John) July 29, 2019


Team USA has had many superstars drop out of the selection pool including James Harden, Anthony Davis and Damian Lillard, among others. Smart points out that those playing in China right now should be given proper consideration for the Olympic team.

As far as this upcoming season goes, Smart indicated that the Celtics remain a team to be reckoned with, even if the spotlight on them is not nearly as bright as it was from the national media a year ago.


"100 percent think they [are underestimating us]. To be honest, that's exactly how we like it," said Smart.