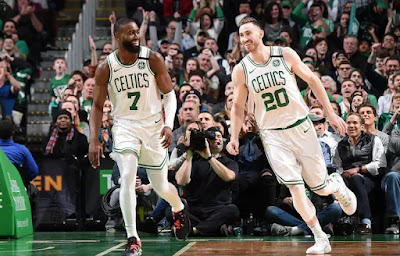 When the Celtics snapped their three-game losing streak Saturday night against the Pelicans, they put forth the kind of effort that Brad Stevens' team had been lacking since the start of the new year.

The defense strung together stops, the offense ran fluid, and the scoring came in an abundance. If 140 points wasn't enough proof that the Celtics' offense is capable of going toe-to-toe with any team in the league, their showdown against the Bucks later this week will be the proper measuring stick for Boston to find out where they stand in the upper echelon of the Eastern Conference.

In the meantime, fans enjoyed Monday's dominating performance against the Bulls as the Celtics cruised to a 113-101 victory at TD Garden. Behind a well-balanced scoring attack and Jayson Tatum's 21 points, six players scored in double figures for Boston.

The Celtics jumped out to a 21-9 lead that eventually turned into 28-14 at the end of the opening frame. Chicago managed to erase its double-digit deficit after the break behind a 13-2 run. They momentarily led by two before the Celtics came roaring back on the offensive end of the floor.

Coach Stevens talked about his team's offense facing pressure throughout the past two outings and how impressed he was by the Celtics' counter to Chicago's defense. Boston was constantly moving the basketball, making sure the offense didn't go stagnant, Stevens explained after Monday's win.


"Pressure was better both games and they're a hard team to play against," Stevens said. "If you take your foot off the gas for even a second offensively, they turn you over and turn it into points. But then we moved the ball. You know, I think that we need to keep doing those two things. I said before the game 'the way that they guard, the pressure they put on you, the way that they trap, the pass was the most important thing tonight.

"If we caught ourselves Iso-ing and all that stuff, we were going to have a long night. I thought we moved it well, just got to keep building off of it."

The Celtics certainly did a good job of spreading the wealth. All five starters finished with at least nine attempts while the team finished shooting at a 47 percent clip. Jaylen Brown scored 19 points, Enes Kanter, who started over the injured Daniel Theis, scored 15 on 7-of-9 attempts and Kemba Walker added 14 on 5-of-9 from the field.

Zach LaVine's game-high 30 points led the Bulls but Chicago's defense fell behind in the second half and spent the rest of the night trailing the Celtics until the end. It was the kind of game where the Celtics looked like a confident and poised unit through continuity of proper execution.


"We've finally got a majority of our guys healthy," Marcus Smart said. "We've finally been able to play together, so we knew that, with the core group of guys we had and with everybody else that's here, what we can do when we're healthy. We've got to get healthy; fulfill the prophecy."

With a daunting task awaiting, the Celtics will prepare for this week's home-and-away, back-to-back set starting at the Garden against the Pistons and ending in Milwaukee against the league-leading Bucks Thursday night. The challenge couldn't have come at a better time.

Milwaukee, sitting atop of the Eastern Conference, will be one of the toughest challenges of the year. Considering the circumstances, it's one that's met with uncertainty along with plenty of excitement, if you're the Celtics -- a team that's far from a finished product.

For the rest of us, it should tell a lot about the Celtics' overall identity as we approach the halfway mark of the regular season.


"The mindset; we've got to come in every game with the mindset and we've got to fully understand that," Smart said. "We're a good team but we're not a great team. We're not where we want to be and we can't just turn the switch on at any given time. We tried it and obviously, it didn't work for us. So, we have to come out the gate ready so we're going to give it."