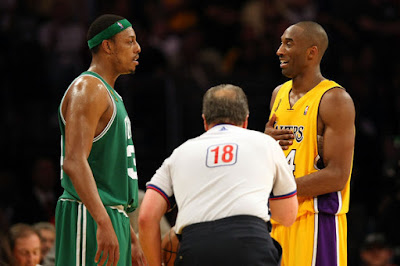 While the history of the Celtics and Lakers dates back to the 1960's, it was the modern day battles between Paul Pierce and Kobe Bryant that always seemed to make the rivalry that much more special.

For 15 years each game seemed epic between these two storied franchises, especially after the arrival of Kevin Garnett to Boston.

Paul Pierce, now a analyst for ESPN, spoke for the first time since the passing of Kobe Bryant, his daughter Gianna and seven others in a helicopter crash that shocked the world this past Sunday.

The former Celtics superstar talked about how he is still devastated over the news, while he recalled great moments with his rival on and off the court. Here's what Pierce had to say about Bryant on Wednesday afternoon.

"Even right now it doesn't even feel real," Pierce said to Rachel Nichols on The Jump. "A guy who motivated me, who brought the best out of me on and off the court. And I tell people today there would be no Paul Pierce ‘The Truth’ without Kobe... I felt like I lost a brother. I felt like I lost a family member."

Paul Pierce speaks for the first time about Kobe Bryant: "There would be no Paul Pierce the Truth without Kobe." Stay for the end, just so moving. pic.twitter.com/2MihkD2sXy
— Rachel Nichols (@Rachel__Nichols) January 29, 2020


It was almost 19-years ago that Shaquille O'Neal anointed Paul Pierce "The Truth" after which the Lakers pulled off a comeback win over the Celtics out in Los Angeles -- but Bryant didn't play that night -- instead it was Pierce who went off for 42 points and the rest as they say is history.


Still, Pierce credits Bryant for always pushing him to become a better version of himself as the years went by. In 2008 it paid off, as Pierce won his first and only championship against Bryant and the Lakers, the same team Pierce grew up idolizing.

Of course Bryant got the last laugh in 2010, when the two teams with the most championships in the NBA squared off again in the 2010 Finals. The Lakers would go on to beat the Celtics in seven games, giving Bryant his fifth and last ring.


"I think that's his favorite one out of all of them to tell you the truth," said Pierce of Bryant beating him and the Celtics for his fifth title in 2010. "We talked about this, me, him and Kevin in lockout meetings, we had a chance to share different moments. And just to get that revenge, he wanted that revenge so bad."

"We had a lot of great moments on and off the court," Pierce added.

Unfortunately there never was a third round in the Finals or a rubber match between Pierce and Bryant during that Celtics-Lakers renewed rivalry era. Neither would even make it back to the Finals for the rest of their careers following the 2010 battle.

Pierce also acknowledged that he grew up without his dad being around and in the aftermath of Bryant's tragic death, he's begun looking for the man he hasn't seen in nearly four decades.


"I grew up without a father. I haven't seen my father since I was four years old. It's made me want to get in contact with him," Pierce said. "I was really like going through the internet, I'm contacting my mom. This, what happened to Kobe, affected me in that way."