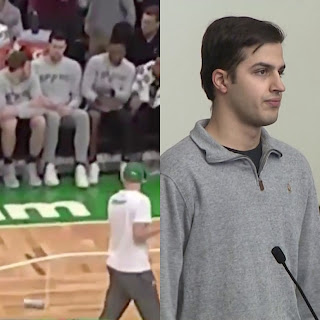 The fan who was arrested for throwing a large can of Truly hard seltzer on to the court during the Celtics 129-114 loss to the Spurs, has received a lifetime ban by the TD Garden.

The tossed can sailed passed San Antonio's bench in the middle of the third quarter, following a hard pick set by Spurs forward LaMarcus Aldridge on Kemba Walker that knocked the Celtics point guard to the floor. No call was made and Walker was given two technical fouls and ejected for using profanity.

While the ejection clearly didn't sit well with Celtics fans, a rain of boos showered the arena before 22-year old Justin Arnold of Everett, MA, who police later identified, made matters worse. He was immediately escorted out of the arena when according to a report by Boston Police, one of their officers "observed some sort of object flying through the air towards the opposing bench" and it "landed directly in front of the San Antonio Spurs bench missing one of the players by just a few inches and exploding onto the basketball court."


NEW: @bostonpolice tell @7News 22yo Justin Arnold of Everett was the @celtics fan arrested/charged w/ disturbing a public assembly. It happened last night @tdgarden after he threw a can of beer toward the San Antonio Spurs bench after Kemba Walker was ejected from the game. pic.twitter.com/d0mVWXNFvz
— Amaka Ubaka (@AmakaUbakaTV) January 9, 2020


Celtics spokesman Christian Megolia said officers saw that the object came from section 303 and the suspect was pointed out by many other fans who witnessed what happened before he was immediately found and arrested.

Though the can didn't hit anyone, Arnold, who officers say was "extremely intoxicated" when he was taken out Wednesday night, was charged with disturbing a public assembly. He pleaded not guilty during his arraignment Thursday morning in a Boston Municipal Court. He was then taken away in handcuffs after the arraignment for a prior incident, that which according to court documents, Arnold was arrested in December 2018 for assault and battery on a police officer, resisting arrest and disorderly conduct outside a bar. Arnold was put on probation until July 10, 2020.


"Last night, after throwing a can onto the court during a Celtics game, a guest was ejected from TD Garden. The guest was arrested by Boston Police and is currently facing criminal charges.  This act is a serious violation of our guest code of conduct and as a result, the guest will be banned from all future events at TD Garden, for life." [WEEI]

Celtics coach Brad Stevens said he apologized to the Spurs and coach Gregg Popovich about what occurred with the fan.


"I told Pop after the game I'm really sorry that they had to experience that," Stevens said. "I hope that person's not allowed in an NBA arena again."


"We can't have that," Hayward said. "I love our fans. I love our passion. But we've got to stay away from that."

In his weekly radio interview Thursday, Celtics president Danny Ainge said in some arenas in Europe players and coaches are protected by dugout-like shelters that surround the entire team and staff from all fans.


"I hope we don't have to get to that," Ainge said on Boston's 98.5 The Sports Hub. "Because it's just obstructed view for people that are sitting close to the benches. It's just not a good look. It's not a good feeling to think you have to be protected from the fans."