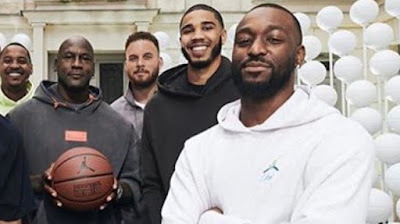 While Kyrie Irving was preparing to sign with the Brooklyn Nets in free agency because he was 'unhappy' in Boston, apparently it was Jayson Tatum who was helping out in the recruitment of Kemba Walker to the Celtics

Walker was one of the first free agents to reach a new deal when he agreed to a four-year, $141 million contract, back on June 30. Of course Danny Ainge and the rest of the Celtics front office got the credit for landing the three-time All-Star, but according to Tatum he had just as much to do with the signing as everyone else involved.

During a Jordan Brand event in Paris and prior to the start of NBA free agency, Tatum's somewhat of a sales pitch made to Walker seemed to have influenced his decision to leave the Charlotte Hornets and join the Celtics.


"I'm very excited," Tatum said on Thursday. "I think I had a big part with him coming here. I was with him in Paris.

"I never told him to come, but I told him I would love for him to join the team and told him how it was. Obviously everybody has to do what's best for themselves, and I'm happy for him."

It was after Walker's introductory press conference, when he sat down with ESPN's Jackie MacMullan and expressed how Tatum had sold him on the city of Boston, it's fans and the Celtics as an overall organization.


"We spoke for quite some time," Walker told MacMullan. "When we left Paris and the days went on and [free agency] came and I made my decision, a lot of it was because of him. "[We talked] about the city, about the fans, the atmosphere, Coach Stevens, some of the players on the team, how things went last year and stuff like that. [But] not once did he say, 'Come [here].'"

Tatum, who was at Faneuil Hall's Abercrombie & Fitch in Boston for the unveiling of his new signature cologne "Fierce," spoke to Boston Globe's Adam Himmelsback about having no problems answering any and all of Walker's questions earlier this summer, regarding what it's like to play for the Celtics and their avid supporters.


"I just told him about Boston, the city, the atmosphere, our fans, the culture, the coaching staff. I answered all the questions he had," Tatum said. I'm excited, and just ready for the season to start and everybody to be around each other and build some chemistry and just get it going."

Tatum will get the chance to develop some of that chemistry and play with Walker in the next few days, along with his teammates Jaylen Brown and Marcus Smart, who were all invited to Team USA's training camp this month. The four Celtics' players have an opportunity to make the final 12-man roster that will participate in the FIBA World Cup in China beginning August 31.


"I played [with the] USA three times when I was in high school, and it's an honor to play for the country and to be along other great players," Tatum said. "That's what I'm most excited for, being around other guys and competing in practice and coming together for a greater purpose. I think that's pretty cool of the possibility of four Celtics being part of this year's team. "I know a lot of people dropped out and I feel like everything happens for a reason, so hopefully we all four make it and start some early chemistry for the season."

"It's a great opportunity and just build from it and carry on into the season and have a great season individually and as a team," Tatum added. "I'm really looking to take a bigger jump. Be more vocal, be more of a leader. Just be a better version of myself."

It's no secret that Tatum is having a great summer so far, as he prepares for his third and possibly breakout year, one that he needs after a somewhat of a down 2018-19 campaign. Despite the many changes already made to the Celtics roster, Tatum still doesn't know what went wrong last season.


"I don't know," Tatum said. "We've all been asked that question a lot. There's no specific answer, but I kind of feel like everybody is ready to leave last year behind us. It's a new season, we've got a new team, new guys ... so last year is behind us."

Even Irving's departure has had no affect on the 21-year old Tatum, who grew close to the superstar point guard over the last two years. Tatum says he still keeps in contact with his good friend Irving, despite now being ex-teammates.


"We still keep in touch," Tatum said. "That's like family. We talk often. Nothing in particular, nothing specific about last season, just friend talk. I'm all for guys doing what's best for them. It doesn't change the dynamic of our friendship."