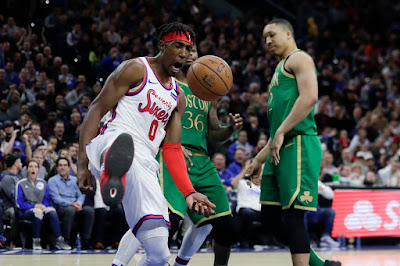 It's not quite time for the Celtics to push the panic button, however, Thursday night's loss to the Sixers was difficult to watch.

The Joel Embiid-less Sixers not only erased a 15-point deficit, but they also grabbed a double-digit lead while outscoring the Celtics 32-18 in the final frame en route to a 109-98 win. They also dissected Boston's offense and dominated on the opposite end of the floor while handing the Celtics their third consecutive loss in more ways than one -- it's the third time this season Philly has knocked off the Celtics and Thursday's loss marked Boston's third straight.

Limiting Jayson Tatum and Jaylen Brown to a combined 21 points on 6-of-26 from the floor was just the edge the Sixers needed in a game where Josh Richardson went off for 29 points, Al Horford (17 points, 8 assists, 6 rebounds) turned in his best game in over a month and Ben Simmons (19 points, 9 rebounds, 3 assists) delivered offensively and cleaned the glass.

Kemba Walker caught fire on his way to 26 points on 10-of-20 attempts and Marcus Smart was having one of those nights where he couldn't miss from behind the arc -- where he netted 5-of-7 threes -- but the Celtics couldn't slow down the Sixers when they needed to most. Horford (plus-19) dominated Daniel Theis as Horford's former teammate relived flashbacks of trying to keep up with the Celtics' former starting big man in practice at the Auerbach Center and Tobias Harris, Mike Scott, and Richardson all took turns rattling Tatum and Brown.

The Celtics got off to the right start Thursday in Philadelphia when they tacked on 35 first-quarter points and controlled the tempo right out of the gate. But when it came down to Boston's shortcomings, it wasn't the offensive approach that eventually did them in late in the final frame, it was its execution down the stretch.

Philly defended at a high level while the Celtics struggled to contain the Sixers' offense as it picked up momentum behind a well-balanced attack. They turned 14 Celtics turnovers into 19 fast-break points and connected on 11 threes.

The Celtics competed. For the third straight night, they were outplayed but unlike the two previous losses, Boston didn't fall behind and spend the night playing catch-up -- this is that point of the regular season where a team hits a wall and the slump begins.

Perhaps the silver lining to remember is that every team goes through this. Every team in the NBA is hit with a grueling stretch of games that will knock them down for a short period of time before ultimately getting back up and stacking up wins.

It only feels worse for two reasons: for starters, we've never seen this year's Celtics team lose three in a row, so naturally, we feel like it may get worse before it gets better (which may very well happen) and the other reason is these defeats are coming at a time when Boston's core is relatively healthy. Seeing Walker back in action after his battle with the flu was an encouraging sign of good things to come but not even a 26-point performance could snap this current skid and Smart and Hayward are fully healthy without any minute restrictions placed but none of it has translated into wins.

The good news is the Celtics collected enough wins through October and December to afford a losing streak without falling behind in the standings, unlike the latest opponent that added another game to Boston's loss column. After splitting their last 10 games right down the middle, the Sixers all of a sudden find themselves in fifth place, eight games behind of first while the Celtics remain in the conference's top-three tier.

Still, the slump remains intact. It started at the beginning of the calendar year and the Celtics are hoping it will fizzle out this weekend -- when they host the Pelicans at TD Garden Saturday night.

For the second straight night on back-to-back nights, the Celtics gave up 50 points in the paint. Celtics also finished minus-10 on the boards (48-38).