Celtics 119, Warriors 104: Boston finding its stride ahead of big matchup vs Sixers 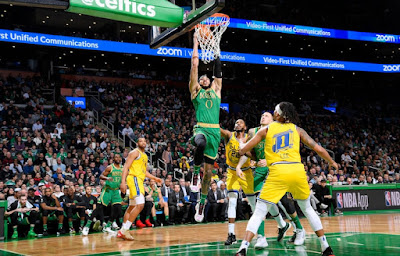 Brad Stevens and the Celtics are reaching a pivotal point in the regular season.

With 47 games under their belt in a fickle Eastern Conference where every top-tier team not named the Bucks are ever-changing places, the Celtics are finding their identity and picking up momentum at just the right time. They topped the Warriors in a 119-104 win Thursday night, their second consecutive victory, following an impressive win against the Heat and on the heels of a challenging matchup awaiting Saturday night.

Stevens, whose frontcourt has been plagued with injuries of late, carried a similar approach from his win in Miami into TD Garden. With his starting unit at full strength and Marcus Smart back into his reserve role, Stevens kept his rotation short.

With a combined 76 points tallied between Gordon Hayward (25 points, 8 rebounds), Jayson Tatum (20 points), Jaylen Brown (18 points, 7 rebounds) and Kemba Walker (13 points), the Celtics once again demonstrated why they're top-heavy offensive firepower can translate to wins on most given nights. However, the second unit's approach on the defensive end has been making a difference lately.

The roles of Grant Williams, Semi Ojeleye and Brad Wanamaker against the Heat and Warriors Tuesday and Thursday night was clear: keep the lead intact. And in doing so, it kept both teams at bay throughout the second halves before in came the starters to eventually close things out.

The Ojeleye/Williams tandem cleaned the glass, strung together defensive stops and have been filling in a void in the frontcourt left behind by Enes Kanter, who's nursing a right hip contusion with no return date in sight. They combined for 13 points, 9 rebounds and four steals while also impressively finishing with a team-high plus-14 game rating.

Meanwhile, Marcus Smart found his offensive rhythm in what turned into another impressive shooting night from behind the arc -- where he drained 5-of-10 of his 3-pointers and finished with 21 points and 6 assists.

Celtics are hoping they can claim their first win of the season against a familiar division foe in the Sixers Saturday night. It'll be the fourth and final meeting between the two; a matchup that could foreshadow a potential challenging first-round matchup.


"We'll have to play a lot more crisp on Saturday if we want to be able to generate good looks," Stevens said. "I think that Golden State did a good job. They're very versatile. They have a ton of like-sized athletic guys on the perimeter, so they did a lot of -- lot of switching -- and that switching was difficult to breakdown one-on-one. Once we started slipping, moving a little bit more, we were a little bit better."

Hayward's game-high 25 points marks the fourth straight game in which he's tallied at least 20 points. It's the first time he's reached such a feat as a member of the Celtics is now averaging 24.8 points on 55.6 percent shooting, including 9-of-19 from deep to go with 9.3 rebounds throughout.