Enes Kanter adding shot blocking to his game, calls himself "The Stop Sign" 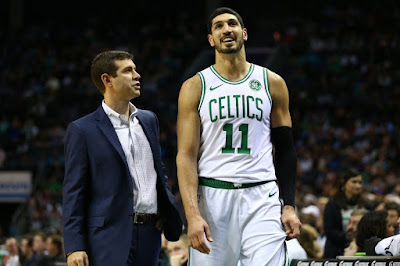 Celtics center Enes Kanter has never averaged more then 0.5 blocks per game in his eight-plus seasons in the NBA - until now.

Kanter played his most minutes during the 2014-15 campaign with the Thunder (31.1 minutes per-game), and 0.5 blocks per game was all the rim protection he provided. He came to Boston with the label of a big man who could score close to the hoop and rebound, but blocking shots was never mentioned as an attribute.

That has changed recently, as Kanter hosted a block party down in Charlotte on New Year's Eve when the Celtics beat the Hornets 109-92. In addition to his double-double (13 points, 14 boards), he blocked a career-high six shots and is now averaging 1.6 blocks per contest over the last nine games, while his overall defense has been commendable.


Look at @EnesKanter thriving on defense. #Celtics have benefited immensely from his play inside, scoring, consistent FT trips and effort on D. Credit Stevens for not overusing him, putting him in right matchups to succeed @celticsblog

During the first portion of the season Kanter has transitioned into a more-complete player. He puts up points - takes down boards - protects the rim - and provides interior and perimeter defense that was not originally expected of him. He is now been telling his teammates that he is the team's "Stop Sign."

The Celtics newly-embedded "Stop Sign" is averaging a double-double while only turning the ball over 0.8 times per game over in the last nine contests, and he is accomplishing this while playing 20.6 minutes a game. Credit both Kanter and coach Brad Stevens with this transition. Stevens is known for getting the most out of his players, and that seems to be the case with Kanter. After the beating at the hands of Joel Embiid and his 76ers last month, Stevens quietly stated that he lacked "that old-school center." He may have one now in Enes Kanter.