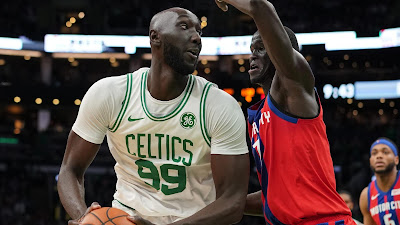 One of the major surprises from the early fan All-Star voting is the Celtics Tacko Fall, who has come in sixth among Eastern Conference frontcourt players. How can this be? He has only played in three games for Boston (all wins), while logging a total of 11 minutes this season.


Tacko Fall is 6th in the All-Star frontcourt votes in the Eastern Conference.


First response from many fans might be, what is he doing there? More in-depth thought brings about the idea that the NBA All-Star game - even the entire weekend - is all about fun and entertainment. Fan voting is all about popularity. If there was a popularity vote based on the fan-favorite-per-minute-of-floor-time, Fall would run away with the vote.

Let's face it, Tacko-Mania is a phenomenon. Since coming to Boston, Fall has been seen all over the city, often in the company of teammates Enes Kanter and Grant Williams. And how many seven-and-a-half-foot orchestra conductors have you seen?


🎼 @tackofall99 is a man of many talents


Even Jayson Tatum was asked during Celtics shootaround on Friday morning if he was surprised about his teammate Tacko Fall being sixth in the voting so far.

Celtics coach Brad Stevens also wasn't surprised about Fall getting so many votes, despite playing so little.


"I know my son votes seven times a day," Stevens said. "I don't love the idea, when you're talking about the All-Star game or any awards, not being based solely on what's happening on the court." [MassLive]

At most, NBA fans have watched Tacko Fall on the court for 11 minutes. They want to see him on the hardwood, even for a few minutes in an All-Star game. But once the players, media and coaches have their say, the chance of seeing the Green Giant participating in All-Star Weekend is slim, unless he actually when's a starting spot via fan voting - and that is a shame.

Celtics fans clamor for Tacko to get into some action every time he comes to Boston. Now basketball fans all over the world are voicing their wish to see him in Chicago covering the center spot for the East. Steph Curry is currently fourth in fan voting at the guard spot for the Western Conference - and he has no chance of playing due to injury. Tacko is ready to go. Let's hope he makes it.


With Tacko Fall's popularity comes the need for a nickname. Give us your vote below.