Could four volume scorers in Celtics starting lineup be overkill? 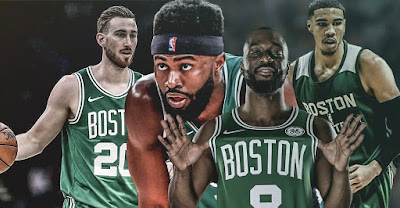 The Celtics current makeup may not require drastic alterations, but a change in the starting-five may be in order.

Among the current first-stringers of Jaylen Brown, Jayson Tatum, Gordon Hayward and Kemba Walker, they are all capable of scoring 20-plus points in any given game. Last season one of the  issues was the fact there were too many mouths to feed. That might be the case this season, especially as of late.

One member of that high-scoring quintet may need to transfer to the second unit and the best choice may be Gordon Hayward. Walker needs to stay where he is and neither member of the Jay team would take kindly to becoming substitutes. We are not talking demotion for Hayward here, but rather a shot at using his many skills to better advantage.


So who should get added to the starting-five? Enes Kanter could be your answer at center, while Daniel Theis at power forward needs a look. Kanter is a reliable scorer down low when given the chance, and he is an excellent rebounder. Brad Stevens can devise schemes that will somewhat nullify his weaknesses on switching defenses.

Acquiring a seasoned veteran like Derrick Rose, that can hit from the perimeter - putting Rose, Hayward and Marcus Smart on the second unit - keeping either Kanter or Theis in the center spot for most of the game - and employing spurts of small-ball with neither big in the lineup - may just work. And assuming Robert Williams comes back at some point from a hip edema, Stevens will keep Boston's wealth of riches all in the game at the same time, which has faltered somewhat of late and a change may be in the offing.

Stevens has always been a small-ball aficionado, and I doubt he favors a two-big frontcourt. But he is also known as a coach that uses what he has and brings out the best in his troops. Hayward has the right mindset to come off the bench, while he'll understand that it may be the best situation for both him and the team. It is worth a shot.