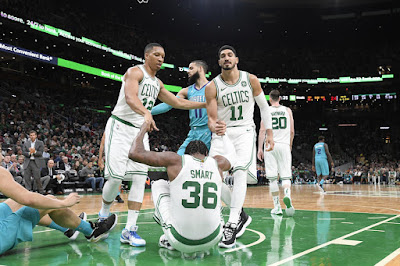 Inject the facts that most successful teams go 8-10 deep in the postseason, plus the reality of injuries usually rears its ugly head - and it quickly becomes apparent that this Celtics crew may not appear playoff-ready. Danny Ainge has until February 6, 2020 (trade deadline) to determine if Gordon Hayward has his mind set on remaining in Boston - and also whether a compatible deal can be reached with the forward, who has a player option for next season.

Once you look past Smart and Kanter, outlooks get a bit shaky come playoff time. We haven't seen enough of Romeo Langford to make any solid evaluations, and although Grant Williams has shown poise and savvy on the court, the intensity of the playoffs can rattle any rookie. Ditto for goes Robert Williams, who still has no timetable on his return from a hip condition. He still needs more seasoning, and being out so long has regressed his progress.

Ojeleye's defensive skills and intensity can't be denied, but he still has trouble putting points on the board and taking down his share of rebounds. Wanamaker has the age and maturity but lacks sufficient NBA experience. It appears that a move to bring in another veteran, particularly one that is playoff-tested, via trade, free agency or buyout seems highly likely.


Two-position guard Jamal Crawford is still waiting for a phone call from one of the 30 NBA general managers, as he remains an unsigned free agent. The 39-year-old veteran last played for the Phoenix Suns during the 2018-19 campaign.

This is what he produced in one explosive game during last season:

The Grizzlies' Andre Iguodala seems like a perfect acquisition for Boston, but matching his $17.2 million salary virtually bars any deal. And if Memphis can't find a trade partner, a buyout would bring a lot of phone calls from playoff-bound teams looking to acquire him. But the Grizzlies thus far have not budged from their stance of trading Iguodala, while they too have climbed into the playoff picture out West.

Who do you think we should get for Andre Iguodala? 👀#Grizzlies #NBA #NBATwitter pic.twitter.com/K496PdO4NT
— Grizzlies Nation (@GrizNationCP) January 10, 2020


It seems cleat that the Celtics do need to pick up a playoff-tested veteran to add to their bench. Whether it be a ball-handler, wing or big man, it doesn't matter. Don't expect a major move prior to February 6 unless Ainge feels strongly that a reasonable deal with Hayward can't be reached. But do look for at least one acquisition prior to the end of the regular season. The Celtics need a solid 9-player rotation for the postseason, and they don't appear to have that - at least not right now.