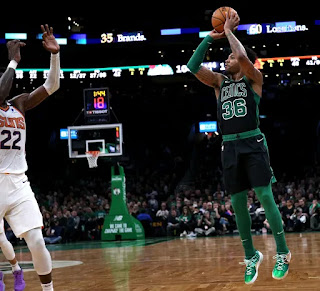 If Marcus Smart had it his way, he'd trade in setting the Celtics franchise record for most threes made in a single game.

That's what he told reporters Saturday night, following a 123-129 loss against the lowly Suns -- which marks the Celtics' third consecutive loss. Despite Smart's whopping 11 3-pointers -- which tops Isaiah Thomas (9) and Antoine Walker (9) -- Phoenix stayed in the driver's seat all night en route to their 18th win of the season.

In fact, it was Smart's game-opening 3-pointer that gave the Celtics their biggest lead of the night. Less than two minutes later, Devin Booker converted a pair of field goals that pushed the Suns ahead and that's where they stayed.

Reminiscent -- to a certain extent -- of what transpired in Milwaukee, the Celtics came close to completing a comeback in the final minutes but in the end fell short. Daniel Theis' dunk in transition at the one-minute mark pulled (114-111) made it a one-possession game but that turned out to be the closest the Celtics would come to evening the score.

After Gordon Hayward missed an alley-oop attempt on an inbound play, Smart's final 3-pointer of the night, which found the bottom of the net with only 28.4 seconds left to play, sliced Phoenix's advantage to only four points before the Suns held on.

Devin Booker (39 points, 10 rebounds, 9 assists) flirted with a triple-double, DeAndre Ayton (26 points, 15 rebounds) had a monster double-double and Mikal Bridges added 26 points of his own, including a big shot down the stretch, following Theis' slam, that gave the Suns a two-possession lead for good.

Smart's career-high 37 points, including 11-of-22 from deep, led the Celtics. Jayson Tatum scored 26 points on 10-of-20 from the floor, Gordon Hayward had 22 points (8-of-20) along with 7 assists and 7 steals, and Daniel Theis finished with a dozen. Saturday's game should be a night Smart will never forget, a shooting record that could stand the test of time for a while but on the heels of another disappointing loss, Smart is keeping his focus on the big picture.


"Right now, it means nothing," Smart said. "I'd trade all that in for a win, especially with the way this team has been playing. I'd rather have the win than the record. I mean, obviously, it's a great accomplishment. It just shows the hard work that I've been putting in is paying off but I'd rather trade that in for the win."

The Suns challenged Smart to beat them from the perimeter and Marcus certainly made them pay in light of getting the start over Kemba Walker, who had the night off. Not having Walker in the mix allowed the Suns to tighten up their defense in other ways, instead of keeping a man on the starting point guard, which would have been the case if Walker was available.


"Yeah, obviously, (he) shot the ball well," Celtics head coach Brad Stevens said after the loss. "They were going under a lot of screens and he obviously was shooting confidently and made some big shots late in the game, end of the half, all that stuff. He's a tough guy and he obviously got a lot of good looks and then took advantage of it."

Not having Jaylen Brown (sprained thumb) for the second consecutive game was a tough blow for the Celtics but the news of Walker was just as troubling prior to Saturday's matchup. Walker, who was experiencing knee soreness, took the night off. He also underwent an MRI that came back clean, Stevens told reporters prior to tip-off, but the Celtics gave Walker the night off to rest, anyways.

One of the toughest tests of the regular season will take place at TD Garden Monday night when the Celtics welcome home the LeBron James and the Lakers, where Boston will fight to snap its three-game losing streak and turn in its first win in a week.