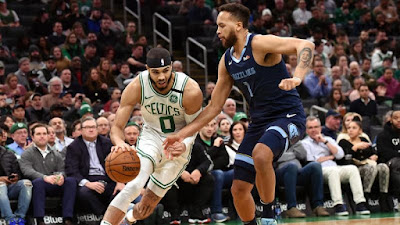 The Memphis Grizzlies entered the TD Garden as one of the hottest teams in the NBA and winners of seven of their last eight, before running into the Celtics -- who just handed the Lakers a 32-point loss earlier this week.

Jayson Tatum took it upon himself once again to lead the charge with 23 points, 7 rebounds, 4 assists, 2 steals and a block, as Boston beat the Grizzlies 119-95 on Wednesday night.

Tatum, who played only 26 minutes, limped to the locker room with 4:43 left in the third quarter. The Celtics called it a right groin sprain and even though Tatum returned to the bench with his right thigh wrapped, he did not re-enter to the game.


"I don't know what everybody's been told, but (a groin strain is) exactly what I was told," Brad Stevens said afterwards. "Didn't sound like it was too bad, not too concerned about it. He'll get a test tonight just to make sure, then we'll figure out more tomorrow when we travel."


Six players scored in double figures for the Celtics, including Daniel Theis (14), Enes Kanter (13) and Gordon Hayward (12). Marcus Smart also finished with 12 points, to go along with 6 assists and 6 rebounds in starter minutes for Jaylen Brown, who sat out with an ankle sprain.


"I thought our guys really dug in on the defensive end of the floor," Stevens said. "Then (Tatum) scored a bunch of buckets there in a row and pushed it out. Our other guys were struggling to get any real rhythm offensively. He kind of got us going. Then in the third quarter every one of those guys picked up where he left off."

Jonas Valanciunas led the Grizzlies with 16 points and 13 rebounds, while Jaren Jackson Jr. and Soloman Hill each chipped in 13 points.

The Celtics, who led by 12 at halftime, capped off a 22-3 run with a Hayward 3-pointer, following Tatum's exit in the third period. The team went 6-of-7 from behind the arc and Boston took a 99-63 advantage into the final frame where they increased their lead to 38 points over the Grizzlies. Coach Stevens emptied his bench to ensure the victory, as no starter played more than 29 minutes.

Boston missed 13 of its first 17 shot attempts in the first quarter and were 1-of-8 from 3-point range, before they used a 23-0 run in the second quarter to take a commanding 58-42 lead over Memphis, who went scoreless for nearly seven minutes and never climbed out of the double-digit deficit the rest of the night.

Kemba Walker (8 points, 4 assists), Smart and Hayward got it going at the start of the third after ending the first half shooting a combined 1-of-16 from the floor, while the Celtics shot 48-percent overall.

The Celtics will travel to Orlando to take on the Magic Friday and then to New Orleans for a rematch against the Pelicans Sunday.

Boston shot over 50 percent (50.6%), while every player who entered the game scored at least one basket. The Celtics also finished with 32 assists on 45 made field goals, while forcing 19 turnovers, including 11 steals on the night.