Danny Ainge on pressure of Celtics making a trade: 'I don’t think it’s time to react' 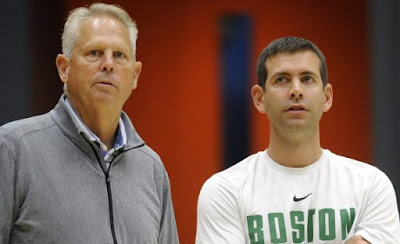 The Celtics are on a season-high three-game skid, following a loss to two under .500 teams and their third defeat to the Philadelphia 76ers.

Boston is in the middle of a 16-game schedule for the month of January with little time off in between and despite their loss to a Joel Embiid-less Sixers team on Thursday, Celtics president of basketball operation Danny Ainge is not fazed in the less bit.


"I don't think it's time to react," he said. "It's been a rough stretch but I'm not worried about that." [Boston Globe]

The narrative around the NBA world is that the Celtics need to make a move for another veteran big man or rim protector and that the pairing of Daniel Theis/Enes Kanter, which has worked considerably well up to this point -- is not enough to compete and make it to the NBA Finals. Yet, with the trade deadline less than a month away, Ainge is no rush to pull the trigger on any deal.


"There's a lot of really good players in the NBA, so there's always players that you can potentially get," Ainge said. "But I don't go into a trade deadline with any more stress or pressure that I have to do something to get better. I don't see it like that. If a deal is there that we like, we do it. If there’s no deals that we like, we don't do it." [Boston Globe]


"That kind of terminology is used a lot in the NBA and I think there's a lot of teams one piece away if it's the right piece, if you get Michael Jordan," said Ainge. "But I don't know even what that means, one piece away, it's all depending upon the piece. Those kind of game-changing pieces are tough to get and tough to trade for, we all know that in our league." [Boston Globe]

At 25-11, the Celtics have the third best record in the East and are just a game behind the Heat (27-11) for second place. Ainge is not interested in trading any of his core-players for an expiring contract that will come in to just play for a few months.


"I don't think I’m looking at any short-term urgency to trade away all my young assets to get some veteran player," Ainge said. "But we're looking. We'll have conversations before trade deadline like we do every year.

"We like our players. I like all the guys on our team right now. We're excited about them and each one of them have a bright future. But sometimes you tweak your roster for a better fit, better balance. But at the same time you can also mess your roster up by making changes, too, because these guys get along and play hard together and they like each other and they know our system.

The injuries to Gordon Hayward, Marcus Smart, Kemba Walker and Jaylen Brown have all played a part this season to the team's overall performance. Now that the majority of the roster is somewhat healthy, Ainge could use the next few weeks of games to analyze if a move does need to be made or not.


"We just had a tough stretch," Ainge said. "San Antonio played great against us the other night. Philly after their long rest, they took it to us. We ran into two really good teams. I'm not even worried about that at all. I know what our guys are capable of doing and I'm confident we're going to see the Celtics that we saw weeks before. And it's good that we're getting close to becoming whole again." [Boston Globe]

Bottom line, Ainge is not pushing the panic button after these recent string of losses, in fact it seems like he's doing the complete opposite and trusting the current roster that no changes are needed, let alone any quick fix.


"Anybody can pick guys on an Xbox game or NBA 2K like you can pick your own team but that's not how the NBA works. We're not going to give up $19 million of one of our good players to have somebody for three months. That ain't gonna happen." [Boston Globe]

As the Celtics are set to play two games at home against the Pelicans and Bulls, followed by a date with the league leading Milwaukee Bucks, Ainge seems confident that his team will snap out of whatever New Year funk they have found themselves in regardless of where they are in the standings.