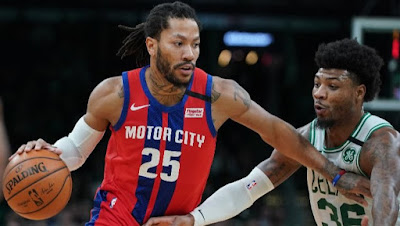 Rose scored 22 points on 11-of-13 from the field - grabbed two boards - and handed out six assists. The former 2011 NBA MVP and three-time All-Star would be a fine addition to the Celtics over the second half of the season and playoffs.

The Pistons are currently tenth place in the Eastern Conference with a 15-27 record. Forward Blake Griffin, very likely is out for the rest of the season with a knee issue and it looks like Detroit is going nowhere once again this year. They have made it known recently that many of the team's players are available in any sort of potential deal.

While the addition of a big man to the Celtics roster could happen, but also acquiring another perimeter shooter to come off the bench is most-important. Rose fits that description and he can play both backcourt positions, while he's still only 30 years old.


Rose will earn $7.2 million this season, so his salary can be matched by Boston in any type of deal. According to the ESPN trade machine, Vincent Poirier and Semi Ojeleye-for-Derrick Rose would work perfectly. A draft pick from Boston would almost certainly be required by the Pistons, who are looking to rebuild. Rose is also signed through next season at about $7.7 million and if his health can be maintained, he could be a significant addition going forward.

If Danny Ainge can pull off such a 2-for-1 trade to acquire Rose, that leaves an open roster spot that potentially could be filled with a big man via the buyout market.