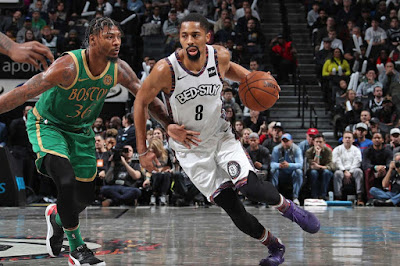 BROOKLYN — The Nets avenged their loss from Wednesday night at TD Garden with an impressive performance against the Celtics that was led by Spencer Dinwiddie’s offense and Brooklyn’s collective team effort on the defensive end of the floor.

The Celtics got off to a slow start. The Nets, who caught fire from deep in the first half of Wednesday’s loss in Boston, duplicated its outside touch when they drained 10 3-pointers in the first half and set the stage for Dinwiddie’s exciting finish.

Scoring 19 of his 32 points in the final two frames, Dinwiddie dominated but the Celtics continued to hang around until the end. Boston forced a pair of turnovers to pull to within four points down the stretch (109-105).

However, when the Celtics failed to come up with a defensive stop in the final 35 seconds of the game, Jarrett Allen slammed home a dunk on a pass from Joe Harris that extended the Nets' lead to six and eventually closed the door on a potential Celtics comeback.


'That start of the game really hurt us," Brad Stevens said after the game. "I thought Brooklyn was more ready probably than we were and they really punched us in the mouth. They scored 22 points in the first six minutes. Any day that you let a team get going like that, it's probably going to be a long day. Brooklyn did a great job, played really well, played really hard, played with a lot of purpose and deserved to win.

"Our guys stayed in it and tried to give the effort to get back but we dug ourselves too big of a hole."

Jayson Tatum's 26 points led five Celtics players in double figures to go with his 9 rebounds and four steals but committed a game-high 6 turnovers. Kemba Walker finished with 17 points on 6-of-19 from the floor and Marcus Smart added 15 points.

The Celtics will look to close out their Thanksgiving weekend in New York on a high note Sunday when they take on the Knicks at Madison Square Garden.

Celtics finished with a season-high 19 turnovers, despite coercing the Nets to commit 18 turnovers of their own.