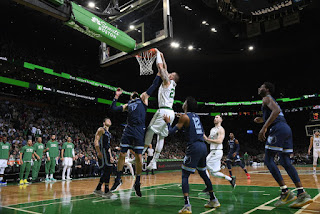 Celtics fans sometimes forget that Daniel Theis, prior to coming to Boston, was a three-time German League champion, one-time Best Defender and four-time All-Star. He is only in his third season in the NBA and just keeps getting better.

Not to often do you see Giannis get blocked 👀😳


In a mere 18 minutes of action in the Celtics 119-95 win over the Grizzlies Wednesday night, Theis notched 14 points on 5-of-7 from the field and a perfect 3-of-3 on 3-pointers. He also racked up four rebounds, two assists, two steals and three blocks. Daniel has become a legitimate rim protector and 3-point threat. And he averaging only less than one turnover (0.8) per game for the season.

Over the last 10 games, Theis is shooting 59-percent from the field and 42-percent from beyond the arc. Those numbers rise to 70-percent and 50-percent respectively, over the last five games. Theis earns $5 million this season and the same amount in 2020-21, with the second year being non-guaranteed.

If Theis continues his recent level of play, Danny Ainge will certainly keep him in the fold - and probably negotiate a longer, and better, deal. The Celtics have until July 2, 2020 to either waive Theis or fully guarantee his $5 million for next season. At this juncture, it looks like he will stick. Where else will Boston find such a mobile defender and rim protector that can score in the paint, from distance with such regularity and take such great care of the ball, while only costing $5 million per season?