Kobe Bryant passes away in helicopter accident at age of 41 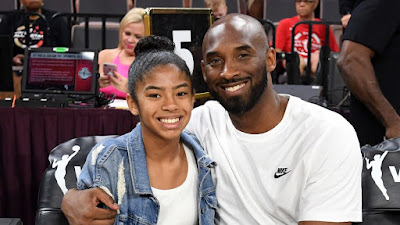 Bryant, 41, and his 13-year-old daughter Gianna, were two of the nine passengers onboard that were confirmed dead and no survivors, according to the Los Angeles County Sheriff's Department.

TMZ Sports first broke the news of Bryant's private helicopter loosing control before it crashed in Calabasas and burst into flames. Among the victims identified so far are John Altobelli, the head coach at Orange Coast College, who perished with his wife Keri and daughter Alyssa, who was teammates with Gianna on the same team that Bryant coached. Christina Mauser, a girls basketball coach (also wife of singer Matt Mauser) has also been named, along with victims Sarah Chester and her daughter Payton Chester, while the pilot has been identified as Ara Zobayan.


According to TMZ's report the helicopter, which was heading to a basketball tournament in Thousands Oaks, slammed into a mountain, while flying through heavy fog. Emergency personnel arrived but the brush fire created by the crash prevented the first responders to immediately get to the site.


"At 9:47 a.m. the Los Angeles County Fire Department received a 911 call of a potential helicopter down and a brush fire...Upon arrival, our firefighters discovered approximately a quarter-acre brush fire that resulted from a crash on the hillside." [CBS Sports]

Kobe Bryant is among those dead in a helicopter crash outside Los Angeles, a source confirms to ESPN.
— Adrian Wojnarowski (@wojespn) January 26, 2020


Bryant spent 20 seasons in the NBA, all with the Lakers and will be remembered as one of the greatest to ever play the game of basketball. Some of his accolades include being a five-time NBA champion (two Finals MVPs), 18-time All-Star, 11-time All-NBA First Team, nine-time NBA All-Defensive First Team, 2008 NBA league MVP and a two-time Olympic gold medalist.

While Bryant was the youngest player in NBA history the very moment he entered the league in 1996, he would later become known as one of the all-time scorers. Just hours before his death, Bryant congratulated LeBron James via twitter on passing him (33,643 points) and officially taking the third spot on the all-time NBA's scoring list Saturday.


The basketball and sports world took to social media and voiced their immediate reaction to the shocking news of Bryant's death.


My friend, a legend, husband, father, son, brother, Oscar winner and greatest Laker of all-time is gone. It’s hard to accept. Kobe was a leader of our game, a mentor to both male and female players. pic.twitter.com/NXsrXmCkkG
— Earvin Magic Johnson (@MagicJohnson) January 26, 2020

There’s no words to express the pain Im going through with this tragedy of loosing my neice Gigi & my brother @kobebryant I love u and u will be missed. My condolences goes out to the Bryant family and the families of the other passengers on board. IM SICK RIGHT NOW pic.twitter.com/pigHywq3c1
— SHAQ (@SHAQ) January 26, 2020

“He had that DNA that very few athletes can ever have.”

“We all feel a deep sense of loss for what he meant to all of us in so many ways.”


Teams around the NBA who were scheduled to tip-off Sunday, as word spread of the tragic news, paid homage to Bryant. Such tributes including a 24-second moment of of silence, players purposely taking a 24-second shot clock violation and or an eight second backcourt violation in honor of Bryant's No. 24 and No. 8 jerseys worn throughout his career.

The Celtics, who visited the Pelicans in New Orleans at the Smoothie King Center, honored Bryant to start the game.


The Hawks' Trae Young wore No. 8 at the start of Atlanta's game against the Washington Wizards. The first time All-Star guard would go on to score 45 points (13-of-24 shooting) and dish out 14 assists in a 152-133 win, becoming the first player since Bryant in 2006 to have a 45-point double-double with under 25 field goal attempts.


Trae Young honored Kobe by wearing #8 at the beginning of the Hawks game.


An investigation into the crash is still ongoing, according to officials. Bryant leaves behind his wife Vanessa and three daughters.