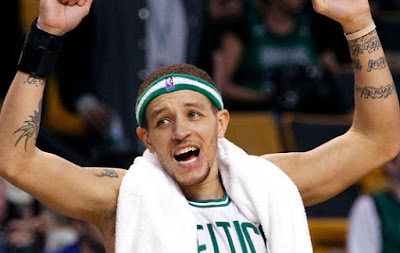 According to the Celtics president of basketball operations, who confirmed a report that West was hired by the team to scout on the East coast, Ainge wanted to help the struggling former Boston No. 24 pick from the 2004 NBA Draft shortly after his NBA career ended in 2012.


"Delonte has worked for us for a couple of years at times doing some college scouting in the [Washington] D.C. and Philly area," Ainge said during his weekly appearance on 98.5 The Sports Hub Thursday.

Two videos surfaced of West this week where he was being beaten up by another man and then a second one of him sitting on a curb handcuffed, while shouting expletives towards a police officer’s camera.

Ainge also confirmed that he has kept in touch with West "periodically" since his paying days.


"Delonte has obviously some troubles and some trials that he's trying to deal with in his life, and I just hope that he can fix his life and get back on a good path," Ainge said.

West spent four seasons with the Celtics and in 2008 was diagnosed with bipolar disorder while playing with the Cleveland Cavaliers.

Ainge recalls West being "excited" about his scouting job, despite West reportedly delivering "mixed results" as a scout due to "fluctuating attendance." He doesn't currently work for the Celtics anymore.


"He's taken advantage of them," Ainge said. "I just think there's a lot going on in his life. It's very complicated, and I don't really want to get into any of that. He accepted the job opportunities."

Though many current and former players have taken to social media to find a way to assist West, Ainge did add that the NBA Players Association, family and friends close to West have also tried to support him in any way possible.


"I know there's a lot of people that are praying and trying to do what they can to help," Ainge said.